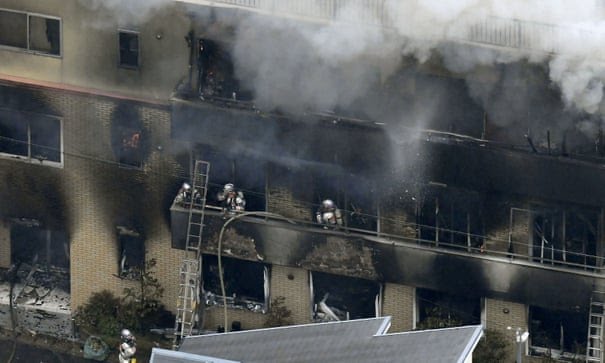 At least 13 were killed and dozens injured in Kyoto, Japan as a result of arson at a three-story building that houses a famed animation studio. The suspect was detained by police.

A 41-year-old man allegedly poured a flammable liquid inside the Kyoto Animation Studio HQ before setting it on fire. The suspect was also injured in the incident, and was taken to hospital. No details were provided about his identity.

Some witnesses heard the suspect screaming ‘Die!’ as he was setting the building on fire, according to police.

The incident occurred around 10:30am local time (1:30 am GMT). Videos and photos of the incident show a thick pillar of white smoke billowing from the badly scorched building, while raging fire can be seen devouring it from the inside.

At least 13 people died and 35 were injured in the blaze. The city’s fire department warned that the death toll could jump to over 20, as more people are being found lying unconscious inside the building.

21.5K people are talking about this

Police reported finding “multiple blades” at the site, although it is unclear whether they belonged to the perpetrator. NHK footage from the scene shows at least five machete-sized knives being photographed by officers.

8,207 people are talking about this

Over 30 fire engines were rushed to the scene. Despite the firefighters’ efforts, it is still feared that the flames could spread to nearby buildings.

Prime Minister Shinzo Abe said that the tragedy was “too appalling for words,” offering condolences to all hurt by the fire.

The studio was founded in 1981 and has become a household name for anime fans, winning a number of prestigious awards for its TV series. Among its best known works are The Melancholy of Haruhi Suzumiya, K-ON!, Lucky Star and Violet Evergarden.