PM of Yemen`s "legitimate" gov.t": We will not allow any rebels to divert compass from our existential battle 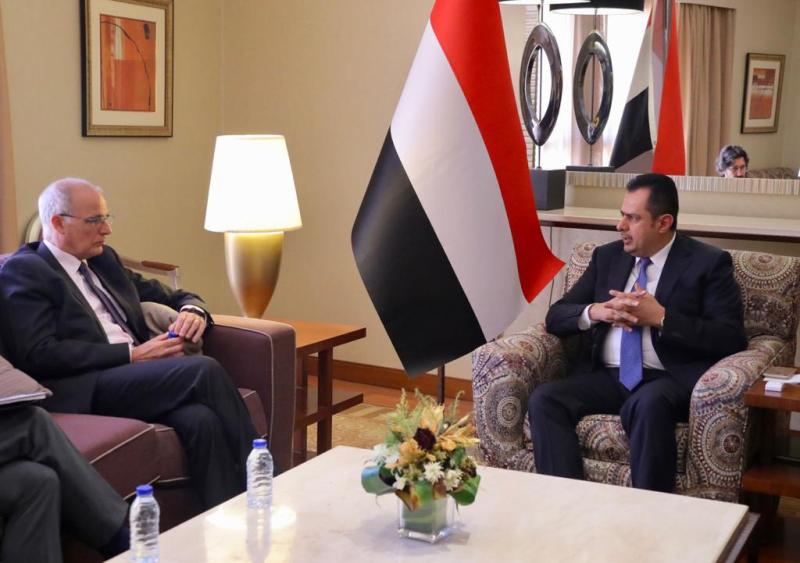 The prime minister of Yemen`s internationally recognized government, Maeen Abdulmalik, said on Sunday his government will not allow "any rebel militia" to launch events to divert the compass from the existential and fateful battle, against the Iranian project in Yemen, in reference to the control of the Southern Transitional Council (STC) on the city of Aden (south).

Abdulmalik said during his meeting in Riyadh with the British Ambassador to Yemen, Michael Aron: "The existential and fateful battle is against the Iranian project in Yemen. No rebel militia will be allowed to fabricate events of any kind to compass this goal."

Aden-based Yemeni news agency "Saba reported that during the meeting, they discussed "the unfortunate and unacceptable events in the interim capital of Aden, and the efforts exerted by the Saudi-led Coalition to Support Legitimacy to contain its repercussions."

The meeting was praised "The relentless efforts of the Saudi-led coalition to bypass the insurgency" in  interim capital Aden.

On August 10, the Yemeni official government accused the United Arab Emirates and the separatist STC of leading a coup against legitimacy in Aden, holding them responsible for "consequences of this coup".

The government called the UAE to "stop its financial support and pull its military support provided to these rebellious groups," but the Emiratis kept silent.

Saudi Arabia, along with UAE, has been leading a military coalition in Yemen since 26 March 2015, in support of forces loyal to President Hadi to retake northern areas controlled by Houthi group (Ansar Allah)

Southern fighters make up a main part in the coalition-led battle against Houthis, but the war has revived deep-rooted tensions between Yemen's north and south, which were under separated states before 1990 unification.