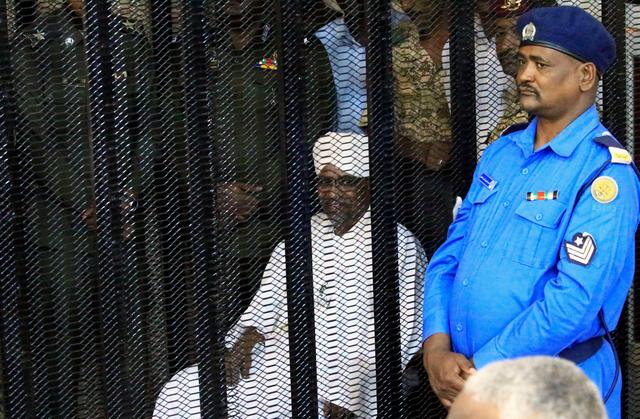 Sudan’s ousted president Omar Hassan al-Bashir acknowledged receiving millions of dollars from Saudi Arabia, a police detective told a court on Monday at the start of a corruption trial that many Sudanese thought they would never see.

Bashir listened to the testimony without comment, sitting in a metal cage and wearing traditional white robes and a turban in his first appearance in a Khartoum courtroom.

He is charged with illicit possession of foreign currency and accepting gifts in an unofficial manner. Bashir’s lawyer dismissed the accusations, telling reporters after the hearing it was usual for leaders to hold amounts of foreign currency.

The veteran leader spoke to confirm his name and age. When asked about his residence, Bashir laughed and said: “formerly the airport district, at army headquarters but now Kobar prison,” referring to the detention complex where he sent thousands of opponents during his rule.

The Saudi government communications office did not immediately respond to a request for comment on the testimony.

Bashir weathered multiple rebellions, economic crises, U.S. sanctions and coup attempts until he was overthrown by the military in April after mass protests against his 30-year rule.

His trial will seen as a test of how serious authorities are about trying to erase the legacy of a rule marked by widespread violence, wars, economic collapse and the secession of South Sudan.

The 75-year-old, who seized power in a coup in 1989, arrived at the courthouse in a convoy with military and paramilitary Rapid Support Forces soldiers.

Family members shouted “Allahu Akbar” (God is the Greatest) and he raised his hand in greeting from the courtroom cage.

A small number of family members were permitted inside the cage after the session ended to speak with him. The next hearing was scheduled for Saturday.

The detective cited Bashir as saying MbS gave him the money for spending outside the Sudanese state budget and that it was spent on donations, without going into further details on who received it.

Sums of $351,000, more than 6 million Euros and 5 million Sudanese pounds were found at Bashir’s home when he was arrested, a judicial source said at the time.

Bashir’s lawyer Ahmed Ibrahim told reporters: “There is no information or evidence with regards to the accusations of illicit gains aimed at Bashir.

“Anyone in his occupation [has] to have foreign currency and it was in a room attached to his office in his presidential residence,” he added.

Bashir was also charged in May with incitement and involvement in the killing of protesters, and prosecutors also want him questioned over suspected money laundering and terrorism financing.

Bashir has been indicted by the International Criminal Court in The Hague on charges of masterminding genocide in Sudan’s Darfur region.

On Saturday, Sudan’s ruling military council, which took over after Bashir’s ouster, signed a power-sharing agreement with the main opposition coalition, paving the way for a transitional government and eventual elections.

The pact sets up a sovereign council as the highest authority in the country, but largely delegates executive powers to the cabinet of ministers.

The sovereign council was due to be sworn in on Monday. But the spokesman for the Transitional Military Council, Lieutenant General Shams El Din Kabbashi, said the formation of the new ruling body would be delayed by 48 hours on the request of the opposition coalition.