Houthi leader calls on him to seek new table for negotiations 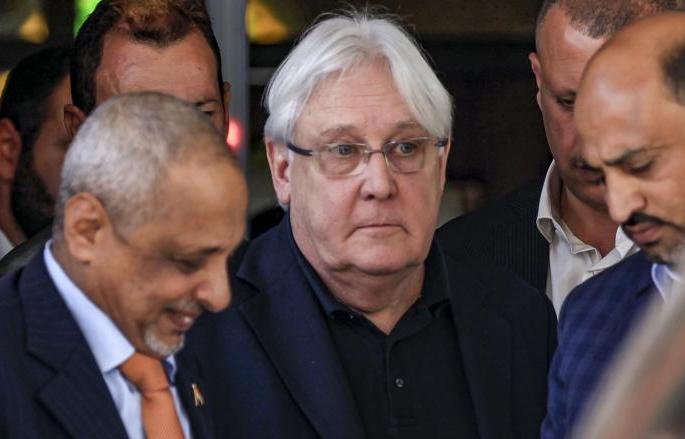 The United Nations Special Envoy to Yemen, Martin Griffiths, arrived on Wednesday in the Yemeni capital of Sanaa, which has been controlled by the Houthi group Ansar Allah since September 2014.

At arrival, Envoy Martin Griffiths gave no comments to reporters at Sana'a airport.

The UN’s Special envoy to Yemen, Martin Griffiths, said on Tuesday that Yemen was divided after the Southern Transitional Council forces took control of Aden.

Martin Griffiths told the UN Security Council that there is “no time to lose” in brokering a peace deal to bring the fighting to a close.

The UN envoy said developments in Aden and Abyan show the difficulty of achieving peace, stressing that the situation in Aden affects the social fabric and “paralyses the work of state institutions.”

He warned that the Yemen faced the prospect of breaking apart unless an agreement ending the decades-long conflict is found urgently.

Griffiths stressed that every additional day of the conflict adds to the total of the tragedy and the misery.

Earlier on Wednesday, a senior leader of the Houthi group(Ansar Allah), Muhammad Ali al-Houthi, tweeted:"The United Nations envoy to Yemen, Martin Griffiths should look for a new table, he knows very well that coalition’s mercenaries do not have any powers, and that any discussions that the aggression states do not agree will not achieve."

Al-Houthi added that “anything that was not approved by the countries of the US-Saudi aggression and its allies in Yemen (refers to "legitimate" government) cannot see the light even if the mercenaries agree.”

Yemen has been racked by 5-year bloody conflictbetween the Yemeni official government's forces, backed by a Saudi-led coalition, and the Iranian-backed Houthi rebels who ousted the government in 2014.