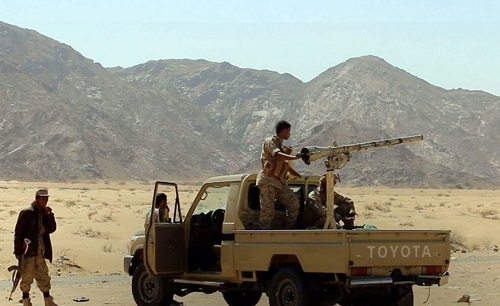 Local authorities in Shabwa and the UAE-backed Southern Transitional Council (STC) have reached a deal to have the 21 mechanized brigade and special forces out of the southern governorate's provincial capital of Ataq, local and military sources said Thursday.

The 21 mechanized brigade and special forces are loyal to the Yemeni Vice-president Ali Muhsin al-Ahmar and the Muslim Brethren-affiliated Islah Party, of which the STC makes an enemy.

Any militarization acts recently made, in preparation for confrontation with the UAE-backed Shabwani elite forces, will be removed, the sources said.

Ataq security will be assumed by security forces and Shabwani elite, with measure taken to evict any northern element from security and military units in Ataq city, according to the sources.

For the STC, the 21 mechanized is an ideologically fanatic brigade, with extremist Islah-wise command, and it has troops from northern provinces.

Shabwa tribes oppose the presence of the brigade in Ataq.

Like the southern resistance forces, Shabwani Elite are local forces formed, trained and armed by the United Arab Emirates, and all their personnel are from southern provinces.

The UAE formed, trained and equipped many Yemeni military and security divisions to fight Houthis but also al-Qaeda that exploited civil war to expand its influence in the south, although the gulf state claims the group was forced out.

The oil-gas-rich governorate of Shabwa hosts the Yemeni NLG Company's project, the largest industrial Total-led project in the country, on the Arabian Sea.

According to media reports, 80 percent of Yemeni oil fields are located in the southern governorates of Hadhramout and Shabwa.

Shabwani elite's peaceful security control over Ataq comes as part of the STC's continual efforts to seize all the south of Yemen.

On August 10, the separatist STC's forces seized full control over the Yemeni southern port city of Aden, seat of the official government, following violent clashes with official army that left 40 people killed and 260 others injured, according to UN release seizure of Aden.

On the same day, the Saudi-led coalition called on the STC to pull back its forces from positions its forces had seized, and threatened to "use military force."