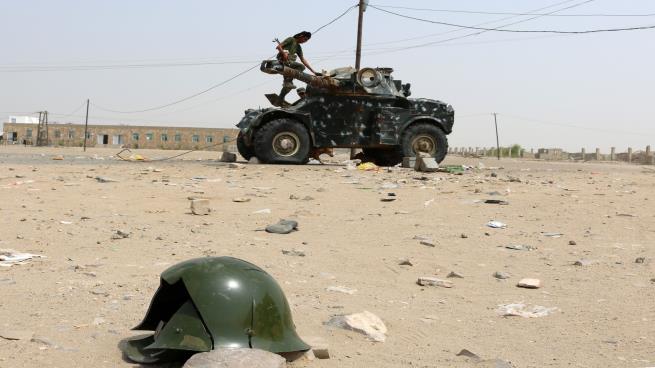 Forces of the Yemeni internationally-recognized government on Saturday took control over camps and entrances of Ataq, the provincial capital of the southern Shabwa governorate, following fierce fighting with the separatist Southern Transitional Council (STC) forces.

Leaders at the Emirati-backed STC admitted defeat and control by the official army of the city.

The national army has secured the desert road after combing the camp and assuring that any army reinforcements could smoothly arrive at Ataq airport, the sources added.

"We direct army and security personnel to guard the public and private properties and stabilize security" in Ataq, Shabwa governor said Saturday.

Genuine values of Shabwa people along with well conduct and tolerance need to be prevailed, Mohamed Saleh bin Adio added on Twitter.

On their part, the STC belittled the government forces' takeover of their office.

"There is what more important than a civil building or a corner of a street," said secretary of the STC chairman.

"Don't quiver for [the loss of] an empty civil building. Protecting the civilians .. is a moral responsibility in which our southern armed forces deal under war rules," Abdul Aziz al-Sheikh added on Facebook.

STC battle with "forces of extremism and terrorism is continuous and open .. Be sure, our southern armed forces have ability and knowledge to deal with evil forces in the suitable place and time," he claimed.

For STC foreign relations officer, Ahmed Omar bin Farid, this "is not the first time injustice troops pass through Ataq, as Houthis had already entered the city by collaboration from traitors and, then, were forced out."

Late on Friday, the STC called on all parties in Shabwa to exercise restraint, abide by ceasefire called by the Saudi-led coalition and insure safety for coalition troops.

In the meanwhile, clashes renewed between the STC and government forces in Ataq of Shabwa, as theformerseeks to take control of other southerngovernorates, after its forces seized on 10 August full control over Aden, following4-day violent clashes with official army that left 40 people killed and 260 others injured, according to UN release.