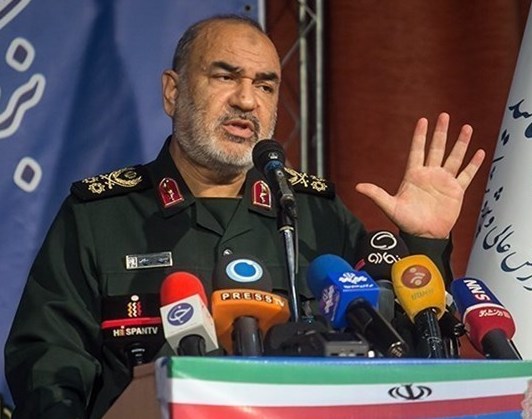 Saudi Arabia has arrived at a blind alley and became powerless in Yemen, commander of the Iranian Revolutionary Guard said Saturday, as the kingdom leads a military coalition since 26 March 2015 in support of forces loyal to President Hadi against the Iranian-backed Houthi group.

Saudi oil facilities and airports are no longer safe, after they have "come underYemeni drones and missiles, while Saudi leaders don't know what to do," Hussein Salami added.

The "Yemeni people has made Saudi Arabia, UAE and USA helpless," as Riyadh has "reached an impasse," he claimed.

"Houthis have not yet attacked Saudi cities, since they act humanely. If they did so, the Saudi regime would face a new threat."

The United States, GCC states and Yemeni government are accusing Iran of supplying the Houthis with weapons, charge rejected by Tehran.

Yemen conflict escalated after a Saudi-led coalition intervened militarily in the country in March 2015 to reinstate the government of President Hadi.

The 4-year war has left tens of thousands killed, hundreds of thousands injured, and 3 million displaced,triggering what the UN calls the world's worst humanitarian crisis, with most of the population in need for a type of humanitarian aid and immediate protection, including 14 million people risking famine and some 1.8 million children suffering malnutrition.