Asia stocks struggle for direction as investors watch US Treasury 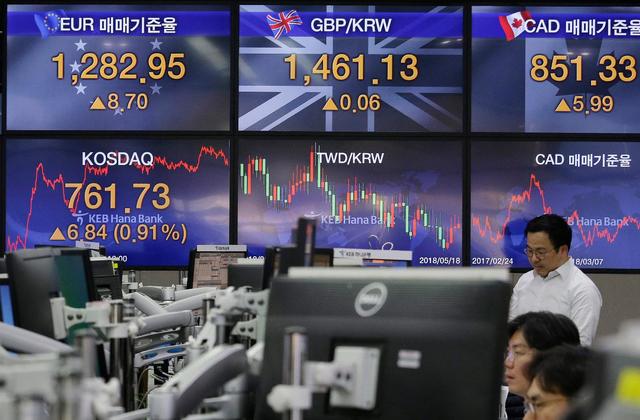 Stocks in Asia traded mixed Wednesday afternoon following an overnight inversion of a closely watched US Treasury yield curve to its worst level in more than a decade.

Mainland Chinese stocks slipped by the afternoon, with the Shanghai composite declining 0.33% and the Shenzhen component down 0.39%. The Shenzhen composite shed 0.231%. Hong Kong’s Hang Seng index was slightly higher.

With both countries remaining locked in a diplomatic spat, Japan officially removed South Korea from a list of preferred trading partners on Wednesday.

Investors watched for movements in U.S. Treasurys on Wednesday, after the spread between the 10-year Treasury yield and the 2-year rate fell to negative 5 basis points on Tuesday — its lowest level since 2007. The phenomenon, known as a yield curve inversion, has historically preceded a recession.

“The escalation in China-US trade war last week will prompt safe haven demand for an extended period with any deal looking increasingly elusive. Moreover, scope for further escalation as the tariff deadlines hit will weigh on sentiment,” analysts at Singapore’s DBS Bank wrote in a note. “In a world where yield is scarce, there appears to be no alternative to US Treasuries.”

Hu Xijin, editor-in-chief at Chinese state-run newspaper The Global Times, said in a tweet Tuesday that China is “not putting so much emphasis on trade talks,” adding that it’s “more and more difficult” for Washington to press Beijing to make concessions as the Chinese economy is becoming increasingly driven by domestic growth.

On Tuesday, China announced measures aimed at raising consumption, including a potential removal of restrictions on car purchases.

The impact is felt by companies in terms of the uncertainty and supply chain dislocation caused by the tariffs, Oliver said, with U.S. business confidence and investment seeing a “quite clear decline” from around the middle of last year when the trade war “really started to ramp up.”

“That impact’s (global), it’s obviously impacted the Chinese economy, it’s impacting Germany, and it really needs to be brought under control ... fairly soon if ... President Trump wants to get himself reelected next year because historically, U.S. Presidents don’t get reelected if there is a recession and rising unemployment in the period before the election,” he said.

The U.S. dollar index, which tracks the greenback against a basket of its peers, was at 98.083, still off highs above 98.4 seen last week.

The Japanese yen traded at 105.83 against the dollar after touching highs around 105.6 yesterday, while the Australian dollar was at $0.6738 after slipping from levels above $0.676 in the previous session.

Oil prices rose in the afternoon of Asian trading hours, with international benchmark Brent crude futures adding 0.72% to $59.94 per barrel and U.S. crude futures gaining 1.02% to $55.49 per barrel.