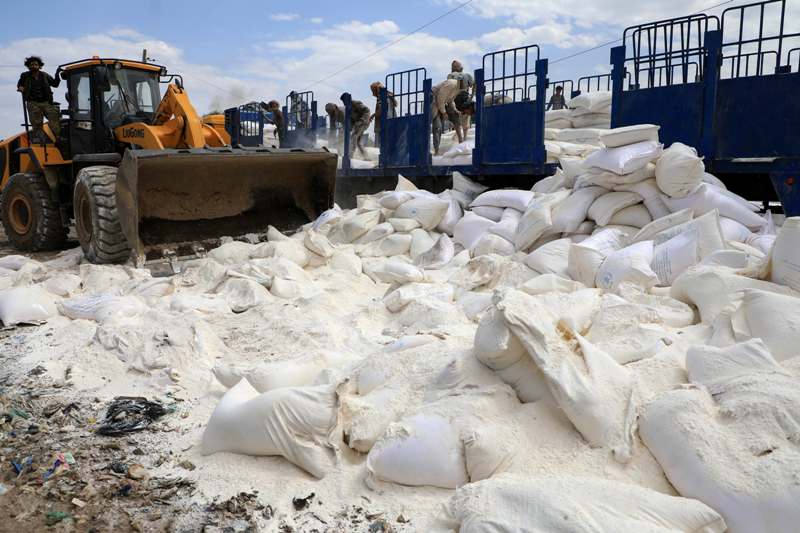 The Houthi group on Tuesday destroyed an amount of the WFP food aid in Sana'a, claiming that they were "expired".

Tractors destroyed 1,500 50-kg sacks of grind wheat and 3,145 boxes of pregnant food labeled with the WFP insignia,according to the Houthi-run Saba.

The "aid shipment contains the so-called warehouse epidemic, in the form of mites,moths and others, in addition to its expiry, which would cause harms to health and environment," the Sana'a-based agency quoted agriculture ministry representative, Yahiya al-Hindi, as saying.

The supplies were seized months ago in DimnatKhadeer district of Taiz enroute forSana'a, said Sana'a customs director Fahmi al-Qahtani. The "whole quantity to be destroyed is 204 tons."

However, an official at the United Nations said the destroyed "humanitarian aids had to be distributed to households in Taiz in November 2018. But this food has ended up stuck at a barrier for months," according to AFP.

The WFP monthly provides food to some 11 million people in Yemen, a spokesman for the UN Program said, highlighting the need for unhindered access to all the country's areas to deliver food aids to those most need them.

In last July alone, food aids were provided to 11.3 million people, as the WFP every month distributes more than 130,000 tons of food in Yemen, the spokesman added.

After discovering in December 2018 that donated food in Houthi areas was being systematically diverted through a local partner connected to Houthi authorities, the WFP has pressed the Houthis harder to implement a biometric system used globally to combat corruption in aid distribution.

On 20 June, the UN agency announced partial suspension of its assistance in Yemeni areas under Houthi control.

Early this August, the WFP and Houthis inked a pact, under which a biometric systemwould be introduced to register 9 millionbeneficiaries living in Houthi-held areas,the WFP said then.

Aid agencies operating in Yemen complain they have been disturbed and threatened by Houthis, but some accuse the rebels of fraud and thieving food aid intended for millions of Yemeni people in need and selling them at markets in provinces and cities under their control in north of the country.

The war has left tens of thousands killed, hundreds of thousands injured, and 3 million displaced, triggering what the UN calls the world's worst humanitarian crisis, with most of the population in need for a type of humanitarian aid and immediate protection, including 14 million people risking famine and some 1.8 million children suffering malnutrition.