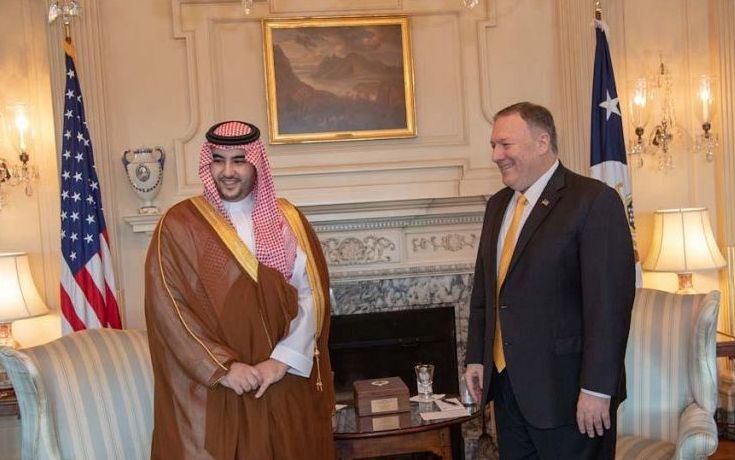 The United States and Saudi Arabia said on Wednesday that dialogue is the only way to resolve the four-and-a-half-year conflict in Yemen.

A statement issued by the US State Department following a meeting with Secretary of State Mike Pompeo with Saudi Deputy Defense Minister Khalid bin Salman  said that Pompeo "renewed US support for a negotiated solution between the Government of Yemen and the Southern Transitional Council." He expressed thanks to Saudi Arabia's efforts to mediate the conflict between them.

The statement added that the two sides "agreed that dialogue is the only way to reach a stable, unified and prosperous Yemen."

" Mike Pompeo tweeted: ' I held a fruitful meeting with Khalid bin Salman to discuss Yemen, maritime security and confront the dangerous activities of the Iranian regime and human rights" .

He added: "It is very important for Yemen's unity, stability and prosperity that the Yemeni government and the Southern Transitional Council resolve their dispute."

Saudi Deputy Defense Minister Khaled bin Salman arrived in the United States on Tuesday amid leaks about Washington's intention to launch secret direct negotiations between Saudi Arabia and the Houthis (Ansar Allah) and that the visit of bin Salman is attempt  to convince Saudi Arabia of the "importance of diplomacy" and to negotiate a ceasefire in Yemen.