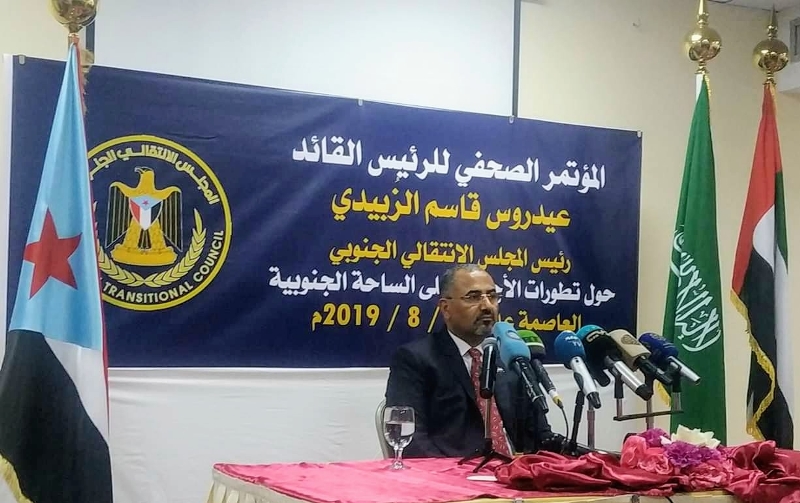 The Emirati-backed separatist Southern Transitional Council (STC) said Thursday its forces "are continuing in removing the terrorist threats" in Aden and other Yemeni southern provinces.

"We have been surprised by assaults on our relatives in Shabwa under the umbrella of legitimacy and by targeting the Elite forces," STC chairman said Thursday, "to restore the global terrorist threat in the region."

"We're working on the removal of any terrorist threat inside the capital of Aden and the south in general, and our armed forces will continue military and security efforts until the south is fully freed and safe," Edroos al-Zobaidi added at press conference.

"We've always called for peace and rejected violence, but terrorist powers have not understood that thinking they could break our will, abort our wins and seize the southern people's goals in the form of restoring their independent state," he told reporters.

Remarks by the STC's leader came in harmony with the Emirati stance, as Abu Dhabi said its warplanes had launched "limited strikes against terrorist militias posing a threat to coalition forces" in Aden airport.

After clashes with the Yemeni internationally-recognized government troops that seized some of the port city's parts, the STC forces retook on Thursday control over Aden.

The Emirati airstrikes, on government sites and reinforcements at Aden's outskirts, facilitated the STC's control on the city, local sources said.

The official foreign ministry said the UAE fighters had stricken government troops when they "were practicing their constitutional right in confronting the Emirati-backed STC rebellious militias."

On Thursday, the Yemeni legitimate government filed an official request at the UN Security Council to hold a session on the UAE "blatant strike" on its troops in south of the country.

The STC has "unjustly appointed itself, by armed force, as a representative for our Yemeni people in southern provinces," said President Abd Rabbu Mansour Hadi in a statement.

The STC has been "committing the most heinous crimes against unarmed citizens, using Emirati war machine in a bid to divide our country," the Yemeni President added.

"Our need for our brothers in the Arab battle against Iran can't be an approach to the division of our country or the abandonment of an inch of our territory."