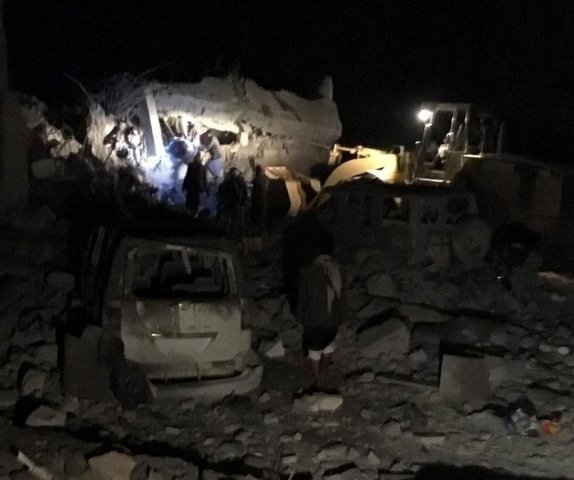 The Houthi group (Ansar Allah) accused the Saudi-led Arab coalition to support legitimacy in Yemen of targeting a prison for Yemen's internationally recognized government prisoners in the northern province of Dhamar resulted in the death and injury of 185 people.

While coalition said its warplanes launched air raids on the group's military site in Dhamar.

The Ministry of Health and Population of the Salvation Government of the Houthis, which controls the capital Sanaa, said in a statement that at least 185 people were killed and wounded in coalition warplanes' airstrikes on a prison for "legitimate" government prisoners in Dhamar.

The ministry added that recovery of the victims is still ongoing at the moment of writing this news amid the difficulty of the arrival of paramedics due to the continued flight over the area, stressing that most of the injuries are serious.

For its part, announced the leadership of the Saudi-led Arab coalition on Sunday that it "destroyed a military site of Houthi militias in Dhamar", pointing out that it is "stores for drones and air defense missiles," according to the saudi "Al-Arabia"TV.

The Coalition added that this operation "is consistent with international humanitarian law and its customary rule and all preventive measures have been taken to protect civilians. "

Abdulqader al-Murtadha, the head of the group's prisoners' affairs committee of Houthis said that the targeted prison includes dozens of prisoners of the "enemy" and there are dozens of dead and wounded, and the fate of many of the prisoners is still unknown.

Al-Mortadha has confirmed that the targeted prison is known to the aggression's leadership and the International Committee of the Red Cross, which had visited it several times, Houthi-run Almasirah TV reporte.

He held the forces of aggression, led by the Saudi and Emirati regimes, fully responsible for targeting the prison and the consequences.

But some air strikes missed their targets and killed hundreds of civilians, prompting UN and international organizations to charge the coalition with war crimes.