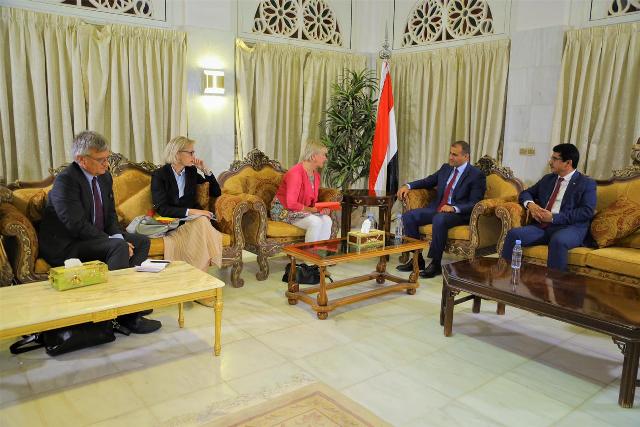 The Yemeni internationally-recognized government said Sunday it would take all legal means available to deal with the Emirati targeting of its troops in south of the country last week.

The Yemeni government cannot accept the continuation or funding of any unofficial military divisions under any justification, said the Yemeni foreign undersecretary at meeting with the Swedish Minister for Foreign Affairs Margot Wallstrom in Riyadh.

Aden and Abyan's provincial capital of Zonjobar were seized Thursday by the UAE-backed separatist Southern Transitional Council (STC), after Emirati air raids had targeted government troops in the two southern governorates, killing and wounding some 300 people, according to the Yemeni defense ministry.

The Yemeni President Abd Rabbu Mansour Hadi has, for the first time, accused the United Arab Emirates of backing and planning the STC coup in an attempt to divide Yemen.

"The legitimate government will take all legal means available to deal with the targeting of the national army and violations committed by the UAE-backed rebels .. in Aden," Mohamed al-Hadhrami told the Swedish top diplomat.

He held the UAE and STC fully responsible for executing the injured at hospitals and storming into houses in the Yemeni temporary capital.

The government "is determined to keep cooperating with the international community in combating terrorism and extremism of all forms everywhere," the Yemeni foreign undersecretary added.

The Swedish official confirmed her country's support for the legitimate government and for Yemen to alleviate the human crisis's consequences, according to the Riyadh-based Saba News Agency.

Inclusive peace needs to be reached and the Sweden pact be applied to get out of the Yemeni crisis, said Wallstrom, noting that her visit to the region came for this purpose.

Parties to the war, after UN-brokered 8-day peace talks in Sweden, reached on the 13th of last December an agreement providing for ceasefire in Hodeida and redeployment of both sides' forces, exchanging prisoners and alleviating blockade imposed by Houthis on Taiz.