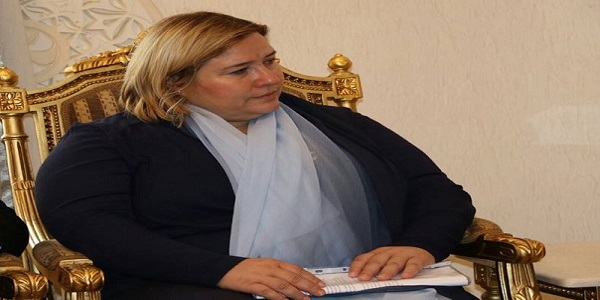 Head of the EU mission in Yemen expressed on Saturday her sadness to see Yemen more divided than before following a futile war that prevented people from their basic rights, hoping that peace would prevail the country.

Today is the last day of my work as EU envoy for Yemen, Ambassador Antonia Calvo-Puerta wrote on the mission's Facebook page. I'm leaving with my sadness to see the country more divided than before and Yemeni people more suffering than before from a futile war that prevented the population from food, health, free movement and security.

At the same time, she added, I'm leaving with happiness and esteem for the kind, dignified, noble-hearted people that I met across Yemen.

Thanks for all Yemenis throughout the country who shared me their happiness and sadness because of airstrikes, bombings, deaths, abduction of family members, starvation and sickness of their beloved, unjust disallowance to leave Sana'a for medication, and fear to freely travel inside their own country.

The European diplomat thanked Yemeni sheikhs, politician, journalists and civil society activists for sharing her their opinions on the conflict and their hopes to go ahead in peaceful path allowing for Yemenis and neighboring countries to live together in peace.

I wish them all realization of Prophet Mohamed's greeting; 'peace upon you', Ambassador Calvo-Puerta said.

The conflict escalated after a Saudi-led coalition intervened militarily in the country in March 2015 to reinstate the government of President Hadi, leaving tens of thousands killed, hundreds of thousands injured, and 3 million displaced.