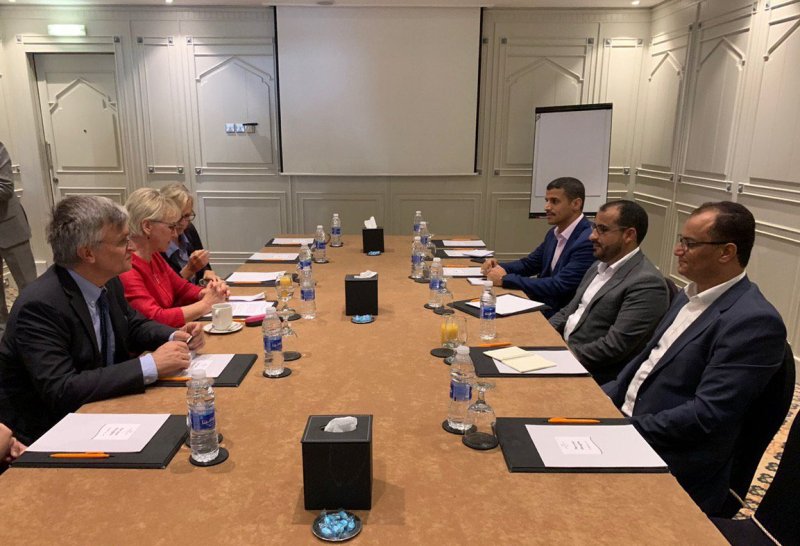 An official spokesman for the Houthi group (Ansar Allah) accused on Monday Saudi Arabia, which is leading a military Coalition in Yemen to support  the internationally recognized government, of thwarting all UN proposals on implementing a prisoner swap agreement and truce in Taiz province.

During his meeting with the Swedish Foreign Minister Margot Wallstrom in the Omani capital Muscat,  Abdulsalam reviewed what he called "obstacles in the process of prisoner swap."

He said that "The Saudi Regime seems to be concerned with its image seeking war prisoners swap of only its soldiers without any concern for the suffering of Yemenis"..

"We reminded the Swedish Foreign Minister of the brutal massacre that targeted war prisoners in Dhamar, in addition to the Saudi regime's rejection of any truce in Taiz.", Abdulsalam added.

Regarding  to the implementation of the Hodeida agreement, the Houthi spokesman accused the internationally recognized Yemeni government of not providing "any real and serious step" to implement the agreement.

The meeting discussed the political situation in Yemen and the nature of the progress made in the Swedish agreement, according to a statement published by "Abdulsalam" on Twitter.

The statement quoted the Swedish Foreign Minister as praising the Houthi National Delegation's implementation of the Stockholm Agreement and its responsible performance during the consultations, affirming continued support for the Stockholm Agreement and the keenness to implement the remaining steps. Swedish Foreign Minister offered condolences for US-Saudi crime that targeted war prisoners with multiple airstrikes in Dhamar.

Swedish Foreign Minister Margot Wallstrom begins a tour of several Arab countries on Saturday in an attempt to mediate the Yemen crisis.