Mattis: Pakistan "most dangerous country’ in the world with ‘fastest-growing nuclear arsenal" 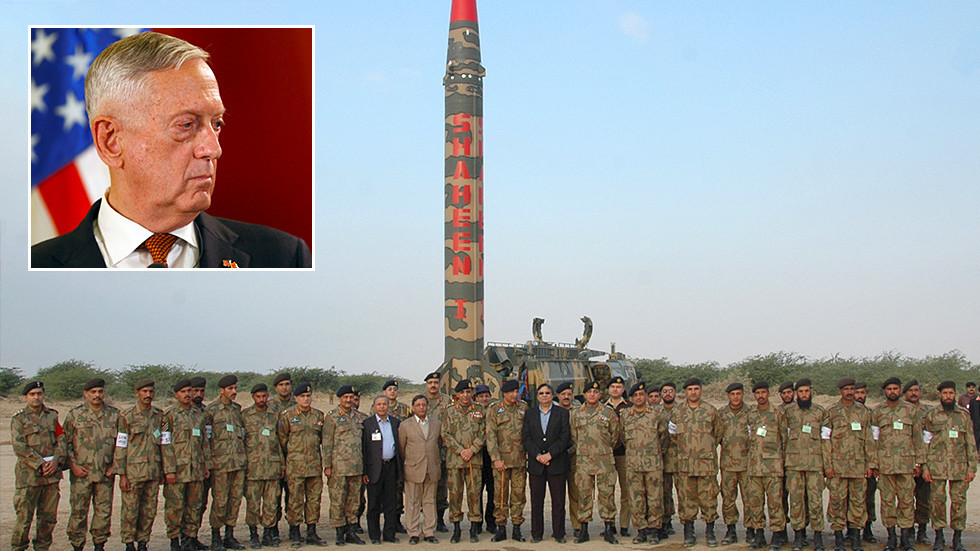 Former US defense secretary James Mattis has described Pakistan as the world’s “most dangerous country,” expressing deep and dark concerns about both the radicalization of its society and its ever-growing nuclear weapons arsenal.

Having spent decades in the military before serving as Trump’s defense secretary from January 2017 to January 2019, Jim ‘Mad Dog’ Mattis made the worrying statements about Pakistan in his new book ‘Call Sign Chaos.’

Throughout the book Mattis, a former top US Marine Corps commander in Afghanistan and later head of US Central Command, claims that Pakistan’s government “views all geopolitics through the prism of its hostility toward India,” to the point where it helped install a friendly government in Kabul merely to resist Indian regional influence.

“Of all the countries I’ve dealt with, I consider Pakistan to be the most dangerous, because of the radicalization of its society and the availability of nuclear weapons,” Mattis writes.

“We can’t have the fastest-growing nuclear arsenal in the world falling into the hands of the terrorists breeding in their midst. The result would be disastrous.” Mattis may have been referring to groups such as Tehrik-i-Taliban Pakistan, an IS (Islamic State, formerly ISIS) wannabe that is hoping to overthrow the Pakistani government and establish its own caliphate.

Furthermore, Mattis believes that ordinary Pakistani citizens “don’t have leaders who care about their future,” which ultimately poses a threat to the US and its allies in the region.

The former Trump adviser describes the relationship between the US and Pakistan as “very twisted” in that, while the Trump administration and its predecessors have long relied on Pakistan to mediate talks with the Taliban in Afghanistan, it also withdrew hundreds of millions of dollars in funding for the Pakistani military.

“We could manage our problems with Pakistan, but our divisions were too deep, and trust too shallow, to resolve them,”Mattis said, arguing that this was precisely why former president Barack Obama did not warn Pakistani authorities of the Seal Team Six incursion into Abbottabad to kill Osama Bin Laden in 2011.

In Mattis’ estimation, what the world “need[s] to focus on right now is arms control and non-proliferation efforts.”