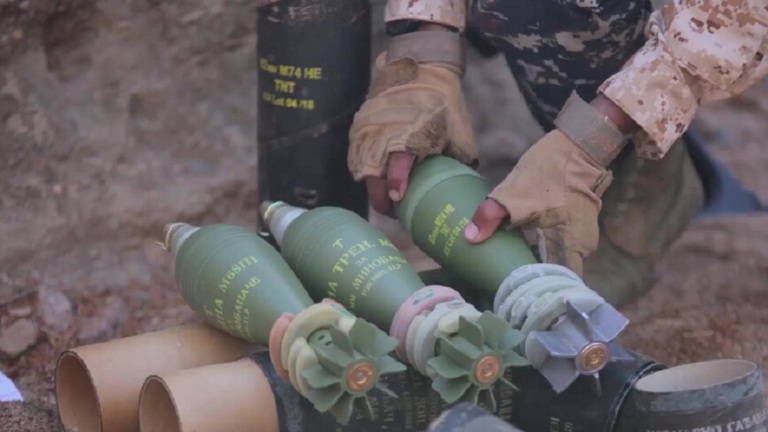 Arms purchased by the US government from Serbian arms manufacturers have reportedly come out in hands of Daesh (ISIS) terrorists in Yemen.

Documents obtained from Serbian arms manufacturer and exporter implicate arms dealers and government officials from the United States, Saudi Arabia and the United Arab Emirates in the transfer of at least three millionpieces of Serbian weapons to Daesh in Yemen and Syria over the past three years, said the Bulgarian journalist Dilyana Gaytandzhieva in a report carried by Arms Watch website.

Pentagon different programs were used as a cover to transfer these arms.

Accessing emails, memos, contracts, photos, packing lists, passport scans and tracking weapons lot numbers of Serbian-made 82mm mortar shells shown in a Daesh propaganda video, Gaytandzhieva claims to have tracked the weapons back to their buyer, the US government.

US Federal contracts and shipping documents between an American company Alliant Techsystems LLC – purchasing on behalf of the US government and commissioned by the Pentagon – and Serbian state-owned Jugoimport SDPR indicate that the original destination for the weapons in one case was the Afghan National Army.

But the arms were diverted to third parties in Yemen and Syria, never making it to their final destination.

These documents reveal, for the first time, a set of US clandestine operations (Gun Gun) sponsored by the US special operations command, Gaytandzhieva claimed.

The author said these documents show how US acts contradict its claimed policy of combating terrorism.

Based on diplomatic notes leaked to the Bulgarian reporter, Azeri-state company Silk Way Airlines – among others – was commissioned by the US government to transport weapons from Serbia and Bulgaria with technical landings made in Baku, Azerbaijan, from which they continued empty to their final destination in Kabul.

Some of the US government contractors – particularly Mil Spec Industries that deals with arms manufacturers in eastern Europe – ask the Serbian companies to remove labels bearing their names on goods.

Since the beginning of the war, the US has backed the coalition bombing campaign with logistic, intelligence and, until recently, midair refueling support for aircraft.