European magazine says that Islah is behind mobilization of terrorist elements

US Institute: Situation in Yemen is going to further tension by return of al-Qaeda and ISIL 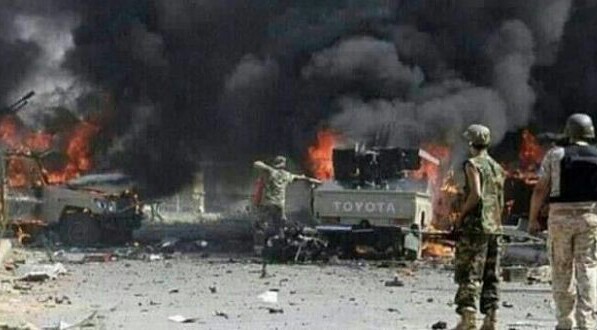 A recent US report warned that the situation in Yemen is going to increase tension and escalation with the return of terrorist organizations such as "Al Qaeda" and "IS" to the forefront of the scene as the bloody conflict in this poor country continues for the fifth consecutive year.

The report issued by the US Institute "Gatestone" for Studies and Research, published on Friday said that " Al-Qaeda and ISIL have become fierce rivals in recent years, with ISIL the more recent manifestation of militant Islam that was responsible for establishing the so-called caliphate in Iraq and Syria. ISIL claims it is a more extreme alternative to al-Qaeda, the original iteration of Islamist-inspired terrorism.".

"Both organisations have a history of taking advantage of the chaos created in failed Muslim states to establish bases from which they can plot attacks against the West and its allies. After the recent setbacks they have suffered -- al-Qaeda in Afghanistan, and ISIL in Iraq and Syria -- it is logical that they should turn to Yemen to establish a new foothold.", the report read.

Al-Qaeda has been operating in Yemen for several years, after the group established its new franchise, Al-Qaeda in the Arab Peninsula (AQAP). The regrouping was just one result the US-led coalition's having destroyed the organisation's terrorist infrastructure in Afghanistan in the aftermath of the attacks of September 11, 2001.

The report pointed out that the AQAP remains a top priority for American counter-terrorism officials; US drones regularly attack AQAP positions in Yemen from their base in the African port of Djibouti.

'The ability of groups such as al-Qaeda to carry out their operations in Yemen has been limited in recent years, since the military intervention of the Saudi-led coalition, which is fighting Iranian-backed Houthi rebels after they attempted to seize control of the country in 2015.", the report added.

The report said: "The root of the tensions between the Saudis and the Emiratis, who provide the bulk of the coalition forces fighting the Houthi rebels, is over their continued support for the UN-backed government of President Abed Rabbo Mansour Hadi. In what has been dubbed a "civil war within a civil war", the Saudis are continuing to back Hadi, while the Emiratis have decided to back southern separatist militias known as the Southern Transitional Council (STC) who oppose Hadi's links with Islamist groups associated with the Muslim Brotherhood."

The report considered that while the political uncertainty continues, however, al-Qaeda and ISIL are taking advantage of the political vacuum to reestablish their own operations in the country, a deeply worrying development that certainly does not bode well for UN-sponsored attempts to end the country's long-running civil war between the government and the Iranian-backed Houthis.

The report concluded by saying that so long as groups such as al-Qaeda and ISIL are able to act with impunity in Yemen, the more remote are the prospects become of ending this dreadful conflict anytime soon.

AQAP exploited the 5-year-old war in Yemen (between the Yemeni government's forces, backed by a Saudi-led coalition, and the Iranian-backed Houthi group)to expand activity in Abyan, Hadhramout, Shabwa, Bayda, Marib and Jawf governorates.

The United Arab Emirates formed, trained and equipped the unofficial SB forces, as well as many Yemeni military and security divisions, in Aden and other southern governorates to fight Houthis but also AQAP, although the gulf state claims the group was forced out.

The European "Eureporter" magazine said in a report Thursday, that the growing role of Islah party and its dominance of the decision in President Hadi's government is a key factor in fueling the recent unrest in the country.

The report said that the Islah Party (the Muslim Brotherhood branch in Yemen) is a major contributor to the destabilization of the entire country.

He added: “Through the social media, Al-Islah launched a crowd of fighters from Marib, known for close ties with AQAP and ISIS.

The governor of Marib himself is also a member of Islah and enjoys the spot of some of the country's most radical extremists.

One of the largely overlooked elements of Yemen's civil war is the involvement of terrorist groups, their ability to terrorize and chaos, with many international media and policymakers focusing on fighting between the coalition and the Houthi rebels.