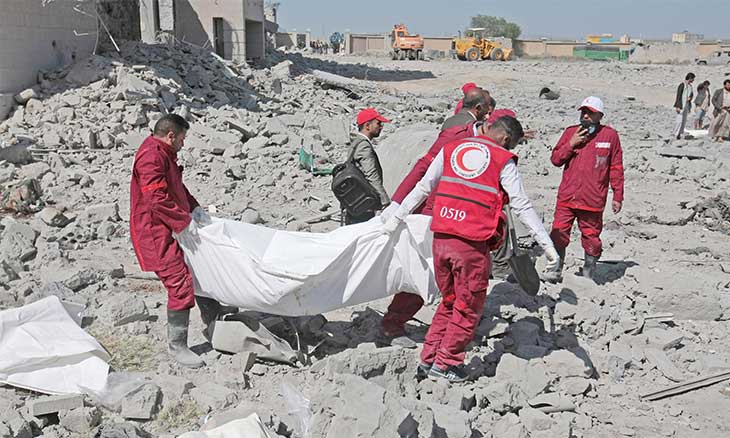 A rally staged Saturday by Yemeni women called for an international rights committee to investigate the airstrike on a jail in the central governorate of Dhamar, and for all the abductees and forcibly disappeared people to be released from all prisons.

Having been kidnapped by Houthis, tens of people were denied visits and provision of food and medicine by their mothers and relatives, who waited years to see them freed, but not to receive their dead bodies, said mothers at the rally in the southwestern city of Taiz.

In a statement, mothers stressed the need for an international rights committee to be "formed rapidly and investigate and hold accountable those who committed the crime of killing scores of abductees and forcibly disappeared people in a jail."

After one week, international human rights groups are still silent at the crime of targeting the prison by Arab coalition aircraft, the statement read, calling for accelerated release of abductees and forcibly disappeared people from all detention centers.

Late on August 31, coalition warplanes launched seven raids on the society collage, currently used by Houthis as a jail for hundreds of captives loyal to the internationally-recognized government.

The Houthi group has accused the Saudi-led coalition of killing 156 prisoners and wounding 50 others in Saturday airstrikes.

But the coalition said it had "destroyed a military site of Houthi militias in Dhamar" that was used as "warehouse for drones and air-defense missiles."

On Monday, Houthis called on families of the attacked jail's inmates to come to hospital in Dhamar to identify their relatives and receive their bodies.

Head of Houthi prison committee, Abdul Kader al-Murtada, claimed that they tried to coordinate with the ICRC on the body delivery but received no reply, according to the Houthi-run al-Masyra TV.

Last Sunday, the UN envoy for Yemen called for investigation into the bombing.

Yemenwar hastriggered what the UN calls the world's worst humanitarian crisis, with most of the population in need for a type of humanitarian aid and immediate protection, including 14 million people risking famine and some 1.8 million children suffering malnutrition.