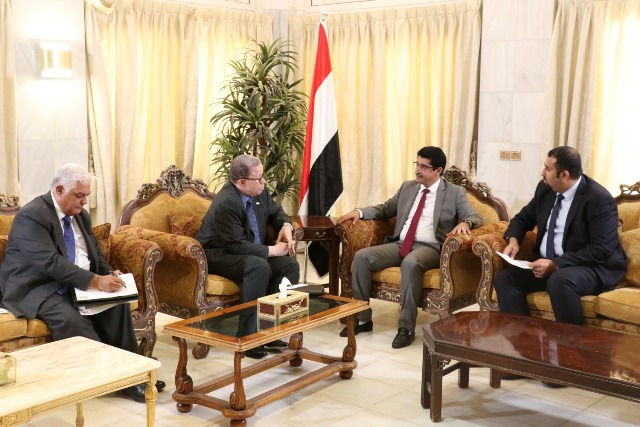 The Yemen`s internationally recognized government criticized on Sunday the Report of the Group of International and Regional Experts on the Situation of Human Rights in the country in bloody conflict for nearly four and a half years.

The undersecretary of the Ministry of Foreign Affairs in the Yemeni "legitimate" government "Mansour" Bagash said during his meeting in Riyadh with ambassador of the Republic of South Africa to Yemen Cosbert Thamba Khaboushi said that his Government remained opposed to the politicization of the human rights file in Yemen, affirming its position on the "Human Rights Council resolution concerning the extension of the so-called Group of Eminent Experts".

He criticized the report issued by the Panel of International Experts, which departed from the rules of objectivity and integrity, as he put it.The Saudi-led Arab coalition to support legitimacy in Yemen on Thursday considered the report of the Panel of experts "not objective and not neutral."

The coalition spokesman, Col. Turki al-Maliki, said in a statement, the UN experts' report on abuses committed by the coalition in its ongoing war against the Houthi Group (Ansar Allah) carried "allegations, accusations, allegations and fallacies".

Al-Maliki pointed out that the coalition has previously alerted to issues relating to the methodology of the report and the Panel's reliance on misleading information provided by unidentified third parties that have not been verifie.

"In addition, it is based on allegations contained in the reports of some non-governmental organizations that have not been documented or verified as well as what is published by the media, which lost the objectivity and impartiality of the report", he added.

Last Tuesday, the UN experts report published by the Office of the High Commissioner for Human Rights the Arab coalition is resorting to starving civilians as a tactic of war, pointing that more than 24 million people in Yemen are counting on aid to survive.

The United States, France and Britain may have been involved in war crimes in Yemen by supporting the Saudi-led Arab coalition, the report said.

The report explained the three major countries may have been involved in war crimes in Yemen by providing equipment, information and logistical support to the coalition.

He added that the governments of Yemen, the UAE and Saudi Arabia, as well as the Houthis and their Popular Committees, have benefited from the lack of accountability for violations of international humanitarian law and international human rights law."

The report compiled a secret list of people suspected of war crimes during the four-year-old war between the Saudi-led coalition and Ansar Allah, which controls the Yemeni capital Sana`a. The Panel of Experts confirmed in its report the need to end the policy of impunity in Yemen.