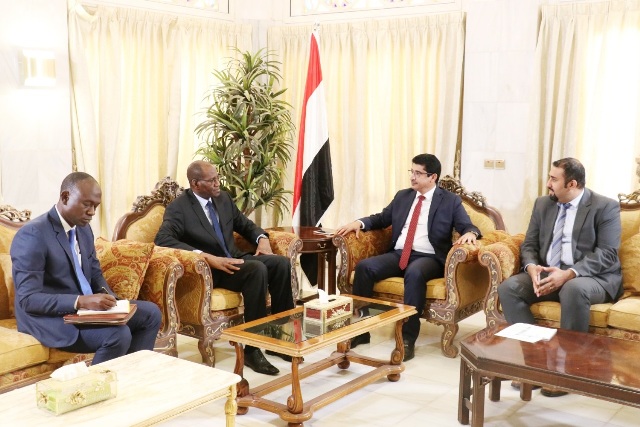 The tenure extended for international experts tasked with investigating HR violations in Yemen is interference in the country's internal affairs, the Yemeni internationally-recognized government said Monday.
Some countries insist on extending the term for HR experts, although the team is not impartial, Yemeni deputy FM Mansour Bajash said at meeting with Burkina Faso Ambassador Mansa Ontana in Riyadh.
The government has recently intensified meetings with diplomats to mobilize against the extension for expert panel formed by the UN HR Council to investigate HR violations in Yemen.
The panel is "another form of politicizing the HR file, interfering in internal affairs and disregarding the national mechanisms," the Riyadh-based Saba quoted Bajash as saying.
The Yemeni government accused a report issued last Tuesday by the experts of breaching the rules of objectiveness, a stance was supported by the Saudi-led coalition.
The panel was formed in September 2017, with its term renewed last September, and its extension will be reconsidered by the UNHR Council at its 42nd session this month.
Last September, the Yemeni government rejected the extension, saying it would not cooperate with the experts in protest of interference in affairs.
Saudi Arabia and the United Arab Emirates "may have used starvation as a method of warfare, acts that may amount to war crimes," the report said last Tuesday. "The very survival of the 24 million people in need should be the first priority."
The United States, France and Britain may be complicit in potential war crimes in Yemen, by backing the Saudi-led coalition, the UN report read.
Yemeni, Emirati and Saudi governments and Houthis along with their popular committees have made use of a pervasive lack of accountability for violations against the international humanitarian and HR laws, the report added.
The UN report compiled a strictly confidential list naming persons suspected of committing war crimes throughout the 4-year war between the coalition and Houthi group that has control over the Yemeni capital of Sana'a.
Unaccountability in Yemen should be brought to an end, the UN experts urged, highlighting the role played by western states as key supporter for the Arab coalition and by Iran as supporter for Houthis.
Yemen has been racked by an armed conflict that broke out after the Iranian-backed Houthis had ousted the official government late in 2014.
The conflict escalated after a Saudi-led coalition intervened militarily in the country in March 2015 to reinstate the government of President Hadi, leaving tens of thousands killed, hundreds of thousands injured, and 3 million displaced.
Yemen war has triggered what the UN calls the world's worst humanitarian crisis, with most of the population in need for a type of humanitarian aid and immediate protection, including 14 million people risking famine and some 1.8 million children suffering malnutrition.