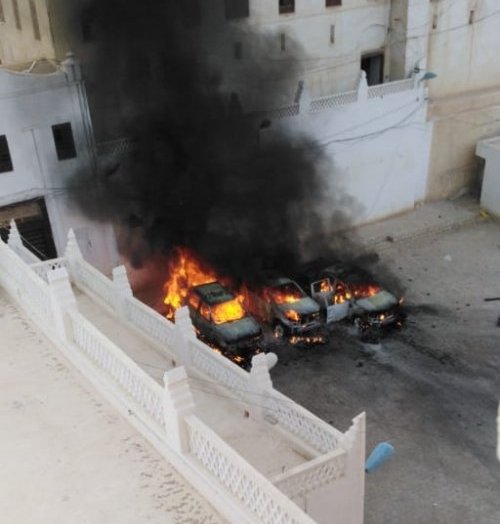 An explosion carried out early Thursday by unknown attackers targeted forces loyal to the Emirati-backed Southern Transitional Council (STC) in the historic city of Shibam, in the eastern governorate of Hadhramout.
Violent blasts targeted the Hadhrami Elite forces in front of the historic Shibam Palace inside the old city, said local sources.
No party has immediately claimed responsibility for the attack.
The explosions killed and injured unspecified number of people, including civilians, and left three military vehicles burnt, the sources added.
A booby-trapped car was likely used at the assault that was followed by gunfire, according to the sources.
Security and military control of Hadhramout coastal cities is the task of the second military region, led by Hadhramout Governor Faraj Salemeen al-Bohsni, as well as the Hadhrami Elite forces, which were formed and backed by the UAE and make an enemy of Muslim Brethren and other Islamic groups.
On the 4th of last July, General Bohsni accused parties, whom he did not identify, of seeking to destroy the military and security troops formed in his governorate.
"To be frank," the governor told then the people of Hadhramout, "military and security troops formed in the governorate are targeted and sought to be destroyed and rooted from existence. Will our honest people be a means for this act of sabotage?"
The UAE formed, trained and equipped many Yemeni military and security divisions to fight Houthis but also al-Qaeda that exploited civil war to expand its influence in the south, although the gulf state claims the group was forced out.
The UAE is a key player in a Saudi-led coalition that intervened militarily in the country in March 2015 to reinstate the Yemeni internationally-recognized government of President Hadi.
Yemen has been racked by a 4.5-year bloody conflict between the internationally-recognized Yemeni government's forces, backed by a Saudi-led coalition, and the Iranian-backed Houthi rebels who ousted the government in 2014.