Military reinforcements for forces of STC transition in Yemen's Abyan 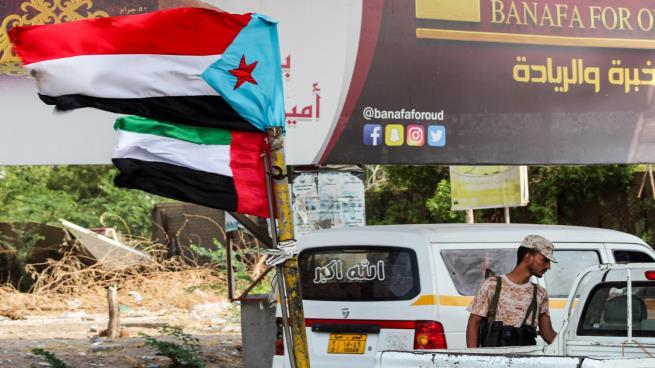 Local sources confirmed that military reinforcements for the forces of the Southern Transitional Council (STC) supported by the United Arab Emirates arrived in the province of Abyan in southern Yemen, which is experiencing great tension.

The sources said reinforcements, including tanks, have reached the cities of Zonjobar and Shaqra in Abyan, where the internationally recognized Yemeni government forces are stationed.

A military source in the STC confirmed, that the Council's forces pushed with vehicles, armored vehicles, infantry personnel, crews and military and food supplies to reinforce troops in Shakra and Wadi Hassan.

Other local sources reported that the transitional forces attacked the government forces on Saturday morning and destroyer tanks and military vehicles on the main road in Al-Mahfad district towards Wadi Al-Kofat in Abyan.

The sources reported that the situation threatens to explode with reinforcements on both sides continuing for several days.

The council's forces tried to take over all southern regions after seizing the interim capital of the government Aden and forcing government forces out of the city.

10 August, STC forces seized full control over Aden, seat of the official government,after 4-day fierce clashes with the official army that left 40 people killed and 260 others injured, according to UN release.

But the government forces beat the council's forces and tightened control of Shabwa and Abyan.