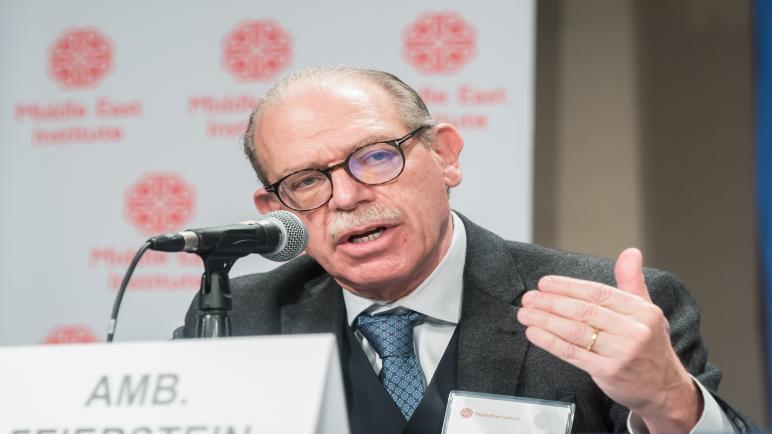 Events seen by the Yemeni southern port city of Aden have reflected a Saudi-Emirati disagreement and divergent goals in Yemen, former US ambassador to Yemen said Friday.

"There no doubt in my mind that, in fact, Saudi Arabia and the UAE have divergent goals in Yemen," he added in interview with the London-based SharqwaGharb website."The Saudis have a much stronger commitment to the unity of Yemen. The Emiratis are ambivalent about that.I think that in certain instances, certainly in terms of what's happening in the South and also what's happened in the east in Mahara governorate, the two have found themselves in different positions on developments. So there are certainly differences between Saudi Arabia and the Emirates."

"Of course, this is a level of tension that stood there for some time. It is not new. In fact, there were similar clashes earlier in 2018 that were resolved through the intervention of the Saudis and the Emiratis.

Now, I think we have the Saudis inviting the leadership to Jeddah to negotiate. My expectation is that once again, the Saudis and the other parties will be able to paper over this conflict and get everybody back onto the same page."

"There needs at some point in the future to be another political negotiation and another effort at reconciling the parties, in order to agree on the way to address the divisions between the North and the South," former US envoy to Yemen said.

On the same day, the Saudi-led coalition called on the STC to pull back its forces from positions and threatened to "use military force," as Riyadh called for dialogue in Jeddah.

The Yemeni official government has accused the United Arab Emirates of diverting from the coalition goals and supporting the "rebellious coup" in Aden.

Saudi Arabia and UAE have been leading a military coalition in Yemen since 26 March 2015, in support of forces loyal to President Hadi to retake areas controlled by Houthigroup seen as proxy for Iran in the Arab Peninsula country.

Yemen's Stability is of Great Importance for Saudis

Ambassador Feuerstein thinks the "stability in Yemen and the territorial integrity are much more important for Saudi Arabia,in terms of the way they see their own national interest.

"The concern that they have is about having a situation where you have long term instability on their southern border. It's a bigger problem for the Saudis than it is for the Emiratis.

"I also think the Emiratis, see Yemen in a bigger context of their interests in the Red Sea … what's happening in the Horn of Africa … whereas the Saudis look at Yemen much more directly in the context of their own security."

Asked about the UAE rejectionof its alleged support for the separatists in their capture of Aden, he said "this is a big question. What the Emirati position on the future of Yemen and the dispute between Hadi's government and the STC is that they have helped train and equip the southern militias for the purpose of confronting the Houthis. They, of course, deny that they have encouraged or in any way aided or abetted the STC or supports secession and that the southerners are basically pursuing their own agenda without the Emirati support. That may be the case, but of course, they cannot avoid the responsibility for the fact that they have created a military force that is outside the command and the leadership of the government.

The STC has tens of thousands of fighters trained, armed and supported by the UAE.

The Red Sea port city of Jeddah has been hosting for more than two weeks indirect talks between Abu Dhabi-backed separatists and Riyadh-backed government, amid KSA-UAE escalating disagreement.

Stalled talks in Jeddah made Saudis and Emiratis issue on Sunday a joint statement calling on the government and STC to halt military operations in the south.

The two GCC states welcomed the two parties' response to the Saudi call for dialogue to solve the crisis in some southern governorates, stressing on the need for full stop of military moves and acts, and of any violations against other entities and public and private properties.

The Saudi-Emirati hidden dispute was sparked by the STC's seizure of Aden on August 10, portending further division in the war-torn country.

Asked about his opinion on the fact that the clashes happened in the aftermath killing of Abu Yamamah al-Yafai, who was one of the UAE-backed commanders of the Security Belt,and although the Houthis claimed responsibility for the attack the STC accused the Islah Party (President Hadi's ally) the US diplomat said this "is correct. I think most of the evidence available does point to the fact that this was the Houthis and not anyone else. But some of the southerners claimed that Islah was in some way aiding the Houthis or even that the Hadi government was somehow aiding the Houthis. There does not seem to be any evidence to support this.

"I think it is a reflection of the long-standing antagonism between the STC and the Islah party that goes back to the events of 1994 and the civil war.  Islah was very much involved in retaking the South when they tried to declare independence again. So this is a longstanding issue between Islah and the southerners. In some sense, I think the South used this tragic incident, even though the Houthis took responsibility, as a way of pushing back and hitting against Islah."

About the UAE announcementof its drawdown from Yemen a few months ago, under a "peace-first strategy", Ambassador Feierstein thinks that "one of the explanations for the Emirati decision about the drawdown and why they believe now is the time that they could drawdown is because, in their view, they have trained Yemeni forces adequately to take responsibility for preventing a Houthi takeover of the country and, therefore, there is no longer a requirement for a direct Emirati presence. Also, we shouldn't forget that this happened at a period where the tensions in the Gulf were rising, and I think that there was a sense that the UAE saw that their military was needed more urgently in the UAE than it was in Yemen. I think that those were really the driving issues for Emirati decision."

As for the US position on these clashes, "I think that fundamentally, they see this as an issue that should be sorted out by the Emiratis and the Saudis. They have not been engaged in this issue other than by expressing concern about the violence and the loss of life.

Asked on Yemen's conflict overall, the US has announced that it is in talks with the Houthis. Despite the latter denied it, what made Washington take this approach, which is the first of its kind?

"I think it is good that Ambassador Henzel is continuing the discussions with them. I think it is important that they hear from us, what our perspectives are, and also that we listen to them. We continue to encourage them to return to the negotiating table and to work with the UN envoy Martin Griffiths and try to find a peaceful solution to this current round of fighting and then go on from there.

"We are not opposed to the Houthis in having a role in the Yemeni government. We have never been opposed. When the situation first deteriorated in 2014 when the Houthis came into Sana’a and negotiated the peace and national partnership agreement, we didn't object to that.

Even the Saudis have contacts with the Houthis. The Saudis talked to the Houthis and also made clear both publicly and privately that they also do not object to a Houthi role in the government.

I think we all draw the line that if the Houthis have some aspirations some idea that they are going to be the Hezbollah of Yemen, that they are going to combine both political and military capability, that they’re going to in some way, control the government of Yemen through force and the threat of violence, then that’s unacceptable to both us and Yemenis. But beyond that, we are not opposed to the Houthis movement. I think it is right that we continue to engage with them.

On September 5, the US Department of State unveiled talks with the Houthi group in a bid to bring about a solution that would end the 4.5-year war.

The US is currently focusing on how to end Yemen's war, and has started talks as direct as possible with Houthis to find a negotiated solution accepted by parties to the conflict, said an assistant to the US Foreign Secretary for Near Eastern affairs.

"We're working with the UN envoy to Yemen, Martin Griffiths, and making contacts with our Saudi partners for this purpose," David Schenker added.

In comments on Schenker statements, Houthi negotiator said "we look at US calls with suspiciously, and doubt its seriousness and drives."

Should any dialogue be held with them, this would be based on the fact that the US is a part of the war on Yemen and has many clues to stop it, Abdul Malik al-Ajri, also member of the Houthi politburo, added in remarks to the Sana'a-based Saba.

Like Iran and Iranian-backed groups, the Houthis shouts the slogan of "death for America" and sees the US as its worst enemy.