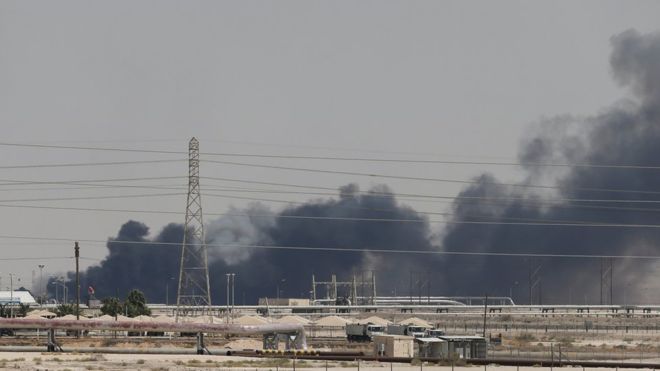 The Houthi group (Ansar Allah) responded to the statements of US Secretary of State Mike Pompeo, in which he accused Iran of responsibility for the attacks on Saudi oil facilities, and ruled out that they were carried out from Yemen, at a time revealed sources that the drones that launched the attack have been flown from Iraq, not from Yemen.

Mohammed Ali al-Houthi, a senior leader of the Houthi group, member of the so-called Supreme Political Council, which was established by the Houthis to manage the areas under their control in northern Yemen said : "The American statement confirms that he serves his goals in the region only, and his first concern how to carry out his adventures at the expense of others."

Houthi tweeted:"( the American confirms that he serves his goals in the region only and his first concern is how to carry out his adventures at the expense of others who consider his smile an achievement,."

US Secretary of State Mike Pompeo said two tweets on "Twitter", that " there was no evidence the strikes had come from Yemen."

He added that " US will work with allies “to ensure that energy markets remain well supplied and Iran is held accountable for its aggression.” He added that the strikes showed Iran wasn’t serious about diplomacy."

Meanwhile, a spokesman for the Saudi-led Arab coalition forces in support of legitimacy in Yemen, Colonel Turki al-Maliki, confirmed continued investigations to find out who was responsible for planning and executing, for the "terrorist attack that took place on Saturday morning on two factories of the Saudi Aramco, Abqaiq and Hijrat Khurais.

CNN quoted a source familiar with the investigation as saying that the attack was carried out by drones flown from Iraq and not from Yemen, according to preliminary information.

On Saturday, a senior Iranian analyst and journalist said the Revolutionary Guards had targeted two oil facilities in eastern Saudi Arabia by drones from Iraq, not  from Yemen.

The Iranian analyst and journalist Babak Taghavi , weeted, citing sources did not clarify their nature, that the drones that targeted Saudi oil facilities in Abqaiq, did not fly from Yemen permanently, but from inside Iraq by elements loyal to the Iranian Revolutionary Guard.

In practice, the two oil facilities targeted in eastern Saudi Arabia are closer to the Iraqi border than to the Yemeni border. Both countries have pro-Iranian armed groups.

For his part, Crown Prince Mohammed bin Salman confirmed in a telephone conversation with US President Donald Trump on Saturday evening that the Kingdom has the will and ability to confront and deal with terrorist aggression

Trump denounced the attack during the telephone conversation with bin Salman and confirmed "his support for Saudi Arabia's self-defense."

The White House said in a statement after the call that the United States strongly condemns today's attack on vital energy infrastructure," adding that "Violence against civilian areas and the vital infrastructure of the global economy only deepen conflict and distrust."

Riyadh announced on Saturday morning that an attack by drones caused two fires in two Aramco sites in Abqaiq province and Hijrat Khurais, stressing "control of the two fires and limit their spread."

The Houthi group (Ansar Allah) claimed responsibility for the attack, their third attack on Aramco's facilities in four months.

A spokesman for the Houthi forces, Brigadier General Yahya Saree, said in a TV statement broadcast by Houthi-run Al-Masirah that ten drones targeted the fields Abqaiq and Khurais in an operation he called the second "balance of deterrence" operation.

Saudi Energy Minister Prince Abdulaziz bin Salman admitted late on Saturday that the attacks on the Aramco facilities in Abqaiq and Khurais on Saturday resulted in a temporary shutdown of about 50 percent of the company's production.

In a statement broadcast by the official Saudi Press Agency (SPA), bin Salman said that Aramco will compensate part of the decline to its customers through stocks, explaining that the fires resulting from the attacks were controlled.

He pointed to that the explosions resulting from the attacks have stopped the production of associated gas amounting to about (2) billion cubic feet per day, used to produce 700,000 barrels of natural gas liquids, which will reduce the supply of ethane and natural gas liquids by up to about 50 percent.