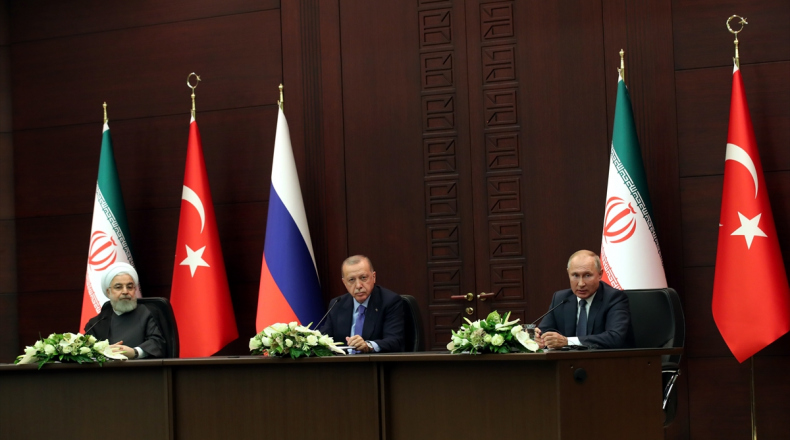 The Houthi group on Tuesday praised statements by presidents of Turkey Erdogan, Russia Putin and Iran Rouhani on Yemen, while the Yemeni internationally-recognized government dismissed Erdogan's remarks as "unacceptable investment in Yemen's events."
Statements by presidents of Iran, Russia and Turkey "represent unanimity on futility of the war" in Yemen, said member of Houthi Supreme Political Council.
The presidents' stance at the tri-press conference has its "political meanings, not nonsense, but considered positions for no funding" return, Mohamed Ali al-Houthi added on Twitter.
The Turkish leader's "deep-sighted" remarks represented the "true positive standing, away from aggression experts' theorizations about unrealistic objectives bearing only destruction and deliberate killing in lost war," he said.
At the news conference in Ankara, the Turkish President Receb Tayyib Erdogan said Monday "we have to examine carefully how the conflict started in Yemen. This country has been completely destroyed. Who caused this?
"Of course, with all this destruction occurring, Yemenis have continually got prepared. We don't hope to see such developments, but we should, however, think of how to rebuild and revive Yemen," Erdogan added.
For the Iranian president, strikes on Saudi oil facilities "are the result of illegal attacks on Yemen, and we have to ask why they struck Yemen daily."
"The Yemeni people has been exercising legitimate right in defending itself against these attacks, whose stop is the solution," Hassan Rouhani added.
On his part, the Russian President Vladimir Putin said Yemen "is living a real humanitarian catastrophe, for which parties need to find a solution.
Erdogan's remarks, in particular, were dismissed by the Yemeni government as unacceptable exploitation of Yemen's events to settle regional scores and to divert attention away from those behind the attack.
Statements by the Turkish president abused facts, Yemeni official info minister said Tuesday. They "are an attempt to justify the terrorist, coward act."
"The Saudi-led coalition responded to President Hadi's call to back the Yemeni legitimate government, army and people in a battle for restoring the State and defeating the coup led by the Iranian-backed Houthi militias seven months after they had raided the capital Sana'a and .. advanced to Aden," Moammar al-Eryani added on Twitter.
The Yemeni government "expected the Turkish president would clearly condemn the crimes daily committed by the Houthi militias, with Iranian support throughout 5 years, against Yemenis."
The United Arab Emirates also objected statements of the Turkish and Iranian presidents, with its Minister of State for Foreign Affairs saying the "justification of the terrorist, unprecedented attack on Aramco facilities, as part of Yemen's war developments, are absolutely rejected."
The recent "attack on Saudi Arabia is a grave escalation by itself," Anwar Gargash added. "The right position of every Arab state, and every responsible country in the international community, should be with Saudi Arabia and with the region's stability and security."
The Houthi group in Yemen has claimed responsibility for Saturday attacks on two Saudi Aramco oil facilities, nocking its production down to half.
The recent attack is the largest on Saudi Arabia since the Saudi-led coalition intervened militarily in the country in March 2015 to reinstate the government of President Hadi.
The United States has accused Iran of the attack, a charge denied by Tehran.
Yemen 4.5-year war has left tens of thousands killed, hundreds of thousands injured, and 3 million displaced.