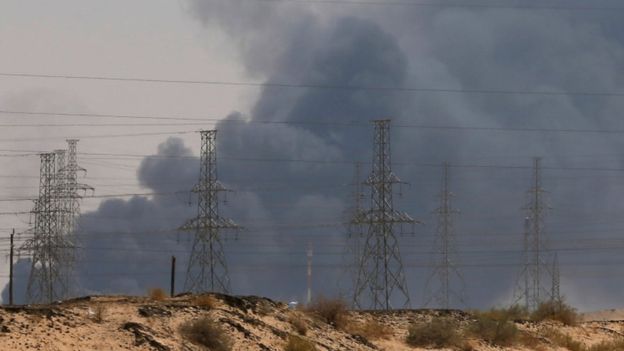 UN experts are conducting an international investigation into the attacks on two Saudi Aramco oil installations, a move that has been attacked by the Houthis, Ansar Allah, which has been fighting the internationally recognized Yemeni government for five years, French Press Agency (AFP) reported on Wednesday.

A diplomatic source said on Wednesday that these experts are on their way to Saudi Arabia or they may have arrived.

Another diplomat said he declined to be identified that "an international investigation is very good," AFP said.

The Houthi leader said: "But they did not leave to investigate the crimes and massacres committed against the Yemeni people. Or for human rights in Yemen. Or for justice. Or forcing Saudi Arabia to respect UN charters."

The senior leader repeated "but they didn't leave" repeatedly in his comment, wondering: "Does the Yemeni people need to replace their bodies with barrels of oil and their shreds for gasoline gallons so that the world realizes an atrocity, inferiority, vileness, criminality and terrorism, which America, Britain, Saudi Arabia and the United Arab Emirates and their alliance are doing in Yemen?"

Yemen has been devastated by a five-year armed conflict between the government backed by the Saudi-led coalition and the Iran-backed Houthis. The conflict erupted after the Houthis ousted the government and seized power in late 2014

Two oil facilities of Saudi oil giant Aramco in the provinces of "Abqaiq" and "Hijrat Khurais" in the eastern region of Saudi Arabia attacked  last  Saturday by drones claimed by the Houthi group (Ansar Allah) in Yemen, which led to huge fires. It was the third such attack by the Houthis in four months on the company's facilities.

Saudi Arabia also officially accused Iran on Wednesday of being behind the attack, stressing that "this attack was launched from the north and was undoubtedly supported by Iran."