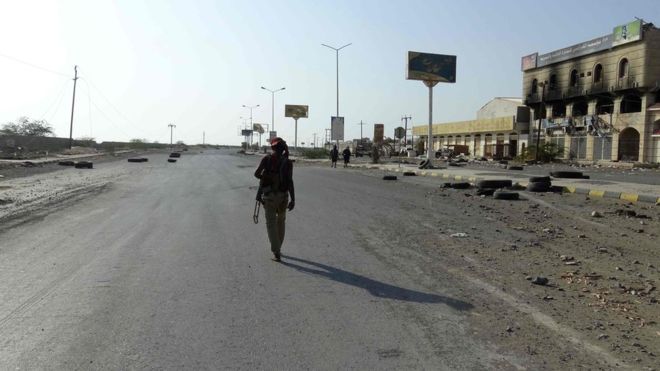 The Governor of Hodeida of the Yemeni "legitimate" government, Dr. Hassan Taher,  said that Houthi group continues to violate the agreements of the joint committee to monitor the truce and ceasefire in the province, reached in its meetings on 8 and 9 September.

Taher said in a statement to the "Asharq Al-Awsat" newspaper  published on Thursday: "As soon as the Tripartite Joint Commission for the Coordination of Redeployment agreed on the international ship off the coast of Hodeida, the militias began to carry out many violations, starting with the targeting of sites inside and on the outskirts of the city."

He pointed to that the Houthis have been pushing around 1,500 fighters, including hundreds of children, to Hodeida in clear violation of the agreement to curb escalation, and to address incidents in the field through direct contact with field liaison officers deployed on the fronts of Hodeida governorate.

The governor of Hodeida explained that the joint team did not start its work so far, which helped the Houthis to do those work, indicating that the Commission was supposed to start its work this week.

He accused the Houthis of "delay in implementing the terms of the agreement, which did not face any direct pressure from the committee, which is supposed to move to prove what was agreed last week."

Tahir said: "Members of the Commission prepare reports and submit them to the Vice-Chairman of the Commission (coordinates redeployment) General Hani Nakhla, but no steps have been taken to stop the abuses and violations of the militias, including the inclusion of fighters inside the city. This is because there are no monitoring teams from all sides at the front line positions.

On 9 September, the Redeployment Coordination Committee (RCC) announced the establishment and operation of a Joint Operations Center comprising liaison and liaison officers from both sides of the conflict, the “legitimate” Government and the Houthi Group, which will operate at the UNMIS headquarters in Hodeida.

According to the Coordination Committee, it was decided to deploy observation teams at four sites on the front lines in Hodeida as a first step to stabilize the ceasefire and reduce suffering and injuries among the civilian population.

For his part, accused the spokesman of the Yemeni government forces internationally recognized Brigadier General Abdo Mjalli, the Houthis group to intensify attacks on the positions of his government army and civilians, "taking advantage of the silence of the United Nations."

"Asharq Al-Awsat" quoted Majali as sayin: "The army will not stand by and will not allow the Houthis to cross its positions."

He added: "The militias did not abide by the ceasefire and continued its violations, taking advantage of the silence of the United Nations, which tempted the militias to continue to target all military and civilian sites, especially in the areas of Tohayta, Durayhimi and Faza, which are adjacent to the coup militias.".

The military spokesman pointed out that the Houthis "are taking advantage of the days before the commission's work spread through the deployment of thousands of fighters in the city, the introduction of medium and light weapons, as well as digging tunnels and snipers on buildings."

He blamed the UN for "what is happening on the ground. The Houthi group has not been clearly condemned for killing citizens and has not put any direct pressure on it to abide by the Swedish agreement."

On Thursday, the United Nations announced the appointment of retired Indian General Abhijit Guha as head of the Redeployment Coordination Committee and the International Observer Group in Hodeida, succeeding Danish General Michael Lolliesgaard, who left office on 24 July.

The redeployment committee comprises six military members from both sides of the conflict, whose task is to coordinate the withdrawal of the forces of both sides from Hodeida city and ports, while the International Observer Group is monitoring the ceasefire and overseeing the implementation of the Stockholm Agreement with regard to Hodeida overlooking the Red Sea (230 km west Sana'a).