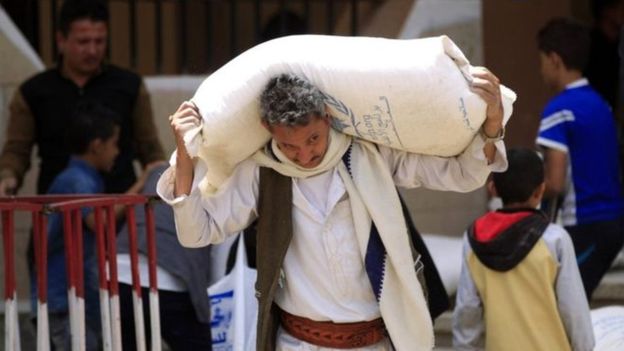 This is a record number of beneficiaries in Yemen, where assistances have reached all the targeted people, WFP added.

The Program, however, is still in need for $ 600 million from donors to provide Yemen with unbroken shipments of food, WPF spokesman said, warning that rations may be reduced starting from October if funding is not received.

The WFP reached a record number of food-unsecured people in August, Herve Verhoosel added. "This is the largest figure we've ever reached."

The food agency had already distributed monthly rations to some 11 million Yemenis, he claimed.

Late last August, the United Nations warned that 22 life-saving programs could stop in Yemen during the next two months unless receive the needed funding pledged by donor countries.

Last Monday, UN humanitarian chief said Saudi Arabia would send $500 million into the UN account to be spent on food aid for Yemen.

Saudi Arabia confirmed Monday the transfer would be made on the 25th of this September, and the United Arab Emirates gave similar assurances to send $200 million, Mark Lowcock told the UN Security Council.

Despite the UN claims on food delivery, a great deal of Yemenis accuse the international organization and Yemeni authorities (official government and Houthis) of lying and misappropriating the assistances.

Donors pledged US$ 2.6 million to meet urgent needs of more than 20 million Yemenis, but less than half of the pledged funds has been received so far, according to the Assistant-Secretary-General for Humanitarian Affairs and Emergency Relief Coordinator in Yemen.

Houthi rebels have said the agency insisted on control over data about beneficiaries, in violation of Yemeni law.