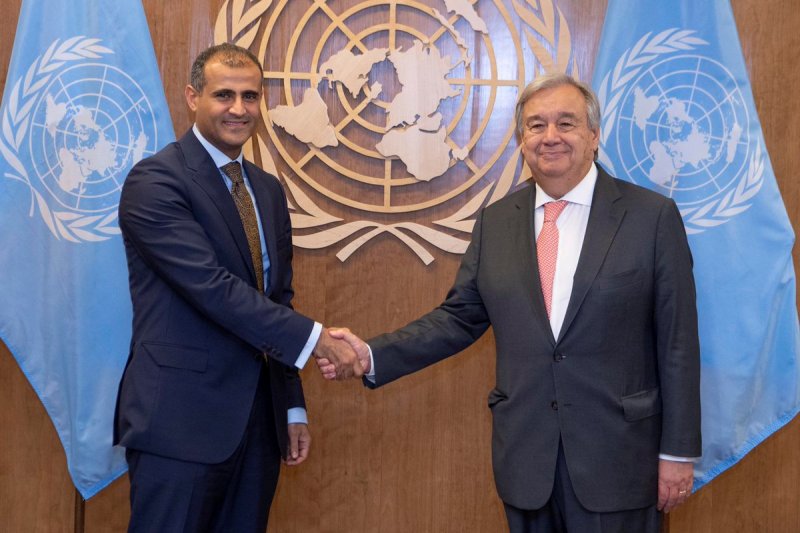 The United Nations on Monday reiterated its commitment to pressing for full application of Stockholm Agreement reached by Yemeni rivals, as the

The UN Secretary-General discussed with the Yemeni official foreign minister the "prospects for a political solution to the conflict in Yemen," the UN said in a statement.

Antonio Guterres"reiterated theUN's commitment to work with the parties to realizethe full implementation of the Stockholm Agreement.

"The Secretary-General emphasized the United Nation's commitment to the unity, sovereignty, independence and territorial integrity of Yemen," the statement added.

Yemeni FM Mohammed al-Hadhrami highlighted the need for "making a tangible progress in Hodeida deal, particularly in terms of the security and administrative local authority," according to the Riyadh-based Saba.

Realizing that "is key for engaging in any next peace talks," he added.

They also discussed the latest developments in Yemen, namely the Stockholm deal application and peace path in the country.

The meeting addressed "ramifications of the armed rebellion recently led in some southern provinces and the interim capital of Aden by the so-called Emirati-backed Southern Transitional Council (STC) and the following Emirati airstrikes on our armed forces," Saba reported.

"It's important to focus on fending off danger of the Iranian expansionist project in Yemen in the form of the Houthi coup," the official news agency quoted Hadhrami as saying.

The war has triggered what the UN calls the world's worst humanitarian crisis, with most of the population in need for a type of humanitarian aid and immediate protection, including 14 million people risking famine and some 1.8 million children suffering malnutrition.

Since the coalition's intervention in March 2015 to support the official government against Houthi rebels, fighting in Yemen has turned into a proxy war between Saudi Arabia and Iran.

Saudi Arabia and allies are accusing Iran of supplying the Houthis with weapons smuggled via regional waters, including ballistic missiles fired at Saudi Arabia, charge rejected by Iran and Houthis.

Parties to the 4.5-year war in Yemen, after 8-day peace talks in Sweden, reached on the 13th of December 2018 an agreement providing for ceasefire in Hodeida and redeployment of both sides' forces, exchanging prisoners and alleviating blockade imposed by Houthis on Taiz.