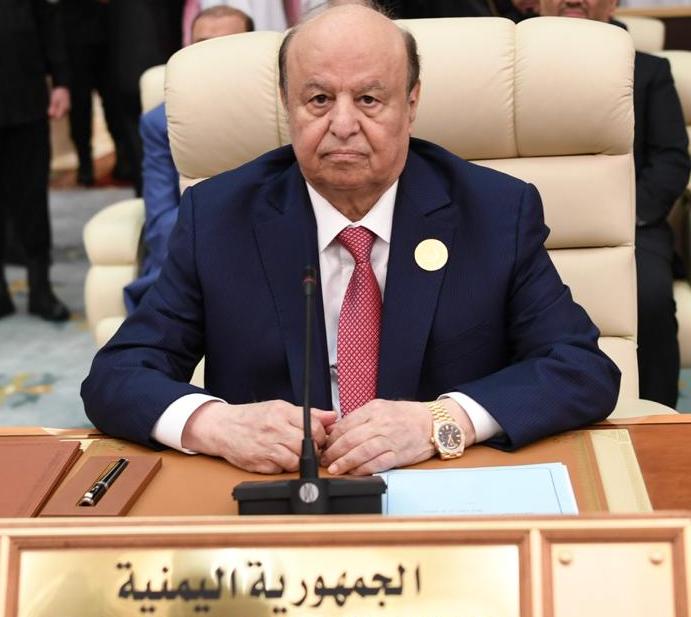 Yemen's President on Wednesday accused the Emirati-backed Southern Transitional Council (STC) of persistently mobilizing, arming and foiling the Saudi efforts to contain crisis in the south, and called on Houthis to listen to reason and stop challenging the Yemenis' will, dubbing the group's initiative as deception aimed to legitimize coup.
The government "responsibly responded to the Saudi call for dialogue to end the rebellion and restore solidarity in face of the Iranian-backed Houthi group," President Abd Rabbu Mansour Hadi said in speech to Yemeni people on the 57th anniversary of 26-September Revolution against imamate.
"Despite the persistent mobilization, armament of rebellious groups and attempts to thwart these sincere efforts, we'll continue our efforts with brothers in the Kingdom seeking realistic solutions that would correct any deviation and adhere to fulfillment of the coalition's goals," he added.
Hadi hailed the Yemeni army's standing by the State, praised the people of Shabwa and said he had ordered to have the Shabwani Elite integrated into the official army, calling on everyone, who "by means of deception rebelled against the State .. to return to right and quit this bloody path."
On August 10, the Emirati-backed separatist STC's forces seized full control over the Yemeni southern port city of Aden, following violent clashes with official army that left 40 people killed and 260 others injured, according to UN release.
The Yemeni official government dismissed the STC's move as another coup (following the Houthis' in Sana'a), accusing the United Arab Emirates of supporting the separatists in Aden.
On the same day, Riyadh called infighting parties for dialogue in Jeddah.
On 28 and 29 August, UAE airstrikes targeted Yemeni official troops at fringes of Aden and in the neighboring governorate of Abyan to halt their advance towards the restoration of Aden.
The UAE said then their aircraft targeted, with "limited strikes, terrorist militias posing a threat to coalition forces."
Hadhramout
As for the lacking services seen by Hadhramout, the Yemeni President assured people of the eastern oil-rich governorate that their "claims are our duty, and we'll studiously work on meeting all your fair demands," but "you should not give chance for those seeking to drag this peaceful governorate into the furnace of conflict and unrest."
Two weeks ago, Hadhramout governor ordered to halt oil exportation, in protest of the "government's reneging on its commitments" to improve his province's economic conditions.
Last Sunday, Hadhramout provincial capital of Mukalla saw thousands of demonstrators backing their Governor Bohsoni's orders, to halt oil exportation, as "one of the province's rights".
Houthis' Deceptive Initiative
Hadi called on the Houthi rebels to listen to reason and return to the nationally and internationally-supported three terms of reference; the GCC Initiative, the National Dialogue's outputs and the UNSC Resolution 2216.
"Stop challenging the Yemeni people's will .. away from deceptive initiatives seeking to exploit the conditions and make the coup admissible," he urged the group.
Last Friday, the Houthi group announced halting all their strikes on Saudi Arabia, if Saudi attacks on Yemen are stopped, as part of "peace initiative aimed at national inclusive conciliation" under talks between all parties.
However, taking the path to peace needs more courage than engaging in a war, Hadi argued, as peace implies "respecting the State, quitting the misappropriation of its institutions, bringing back its resources and handing the arms."
"To seek deficient peace - based on a State under racial custody and priestly regime and on abused freedoms - is but to prepare for other rounds of fighting that people will never allow to reoccur," Hadi added.
The President reiterated his support for efforts by the UN Secretary-General and his envoy to Yemen, calling on the international community to press for applying the Stockholm Agreement.
Yemen has been racked by a 4.5-year bloody conflict between the official government's forces and the Houthi rebels who ousted the government in September 2014.
Saudi Arabia has been leading a military coalition in the country since 26 March 2015, in support of forces loyal to President Hadi to retake areas controlled by Houthis.
Parties to Yemen's war, after 8-day peace talks in Sweden, reached on the 13th of last December an agreement providing for ceasefire in Hodeida and redeployment of both sides' forces, exchanging prisoners and alleviating blockade imposed by Houthis on Taiz.
But none of this has taken place so far, with both sides trading blames for trying to thwart the deal.
The war has left tens of thousands killed, hundreds of thousands injured, and 3 million displaced.