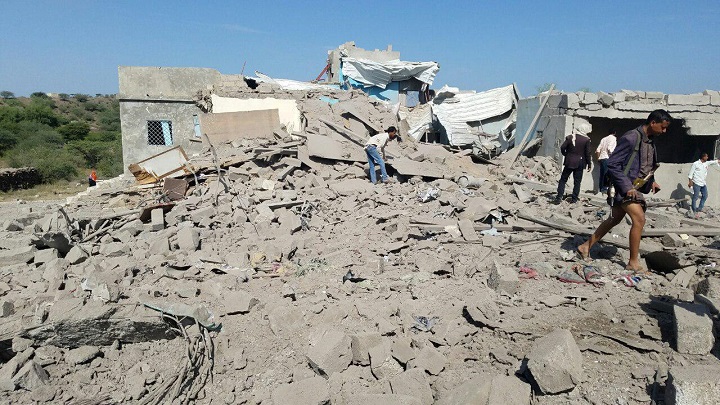 The Houthi group (Ansar Allah) accused the Saudi-led Arab coalition in support of legitimacy in Yemen of killing and wounding 40 citizens in three provinces since launching the peace initiative on 20 September.

The spokesman for the Ministry of Health and Population in the Salvation Government of the Houthis, Dr. Yousef Al-Hadiri, said that the coalition warplanes and the fire of Saudi border guards and forces loyal to coalition have killed 24 citizens and wounded 16 others, mostly women and children in the provinces of Amran, Dali, Hodeidah.

According to the Houthi-run Yemeni news agency "Saba", a spokesman for the Ministry of Health condemned the silence of the international community on the crimes of aggression and its response to the peace initiative blessed by the European Union and the United Nations.

The Special Envoy for Yemen, Martin Griffiths, welcomes the initiative announced by Ansar Allah on 20 September, on the cessation of hostile military acts against the Kingdom of Saudi Arabia. He also welcomes the expression of further openness towards the implementation of the Prisoner Exchange Agreement and the desire for a political solution to end the conflict.

The Special Envoy stresses the importance of taking advantage of this opportunity and moving forward with all necessary steps to reduce violence, military escalation and unhelpful rhetoric.

Speaking at the same event, Saudi Minister of State for Foreign Affairs Adel al-Jubeir on Saturday said the weapons used were Iranian and vowed to release their full findings.

Adel Jubeir said his government was in consultation with allies and would take "necessary measures" after its investigation was complete, without giving details of possible actions.

"The kingdom calls upon the international community to assume its responsibility in condemning those that stand behind this act, and to take a firm and clear position against this reckless behaviour that threatens the global economy," he said.