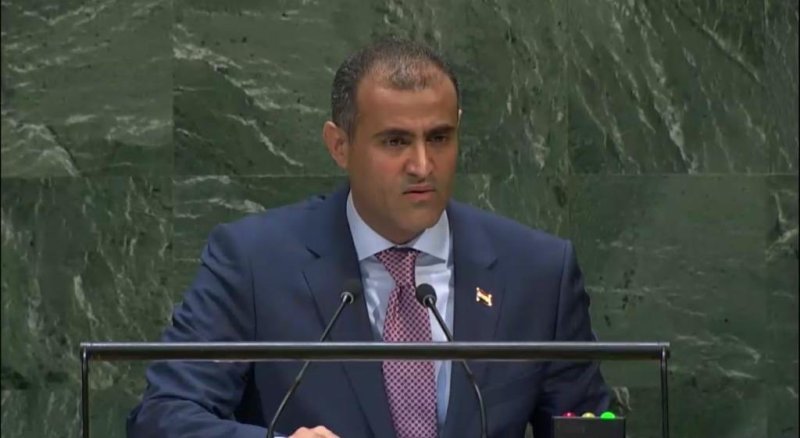 The Yemeni internationally-recognized government said Saturday the Emirati warplanes had hit its troops as countering the mutiny by the separatist Southern Transitional Council (STC) in the port city of Aden.

The UAE-backed STC "led a rebellion against the State and an armed burglary against government offices in interim capital of Aden, possessed by illusions of secession, authority and imposing of choices by force of arms, while targeting the constitutional legitimacy and Yemeni identity," the Yemeni foreign minister told the UN General Assembly.

The official army was "directly hit by Emirati aircraft, in violation of the international law" and in "clear deviation from noble objectives of the coalition in support of legitimacy in Yemen," FM Mohamed al-Hadhrami added.

He thanked Saudi Arabia for actions "to end this rebellion, to stop these acts by the United Arab Emirates in liberated areas, correct the course, and gather all efforts towards ending the Houthi-Iranian coup in Yemen."

On August 10, the Emirati-backed STC's forces seized full control over the Yemeni southern port city of Aden, following violent clashes with official army that left 40 people killed and 260 others injured, according to UN release.

The UAE said then their aircraft targeted, with "limited strikes, terrorist militias posing a threat to coalition forces."

The Yemeni FM labeled Iran as the "foremost sponsor of terrorism in the world, devoting the Iranian people's funds to achieve its expansionist greed in the region by supplying militias and proxies abroad with arms, funds and subversive expertise," according to the Riyadh-based Saba.

By help of "our armed forces .. and coalition, Yemen has been able to lien in the ideological Houthi militias that destroyed everything beautiful in Yemen," Hadhrami said.

He appreciated the role of donors who stood by Yemen at hardship and contributed to alleviating the burdens of humanitarian crisis, calling on the UN Security Council to pressure Houthis into fulfilling the deals and commitments they made at Stockholm talks, withdrawing from Hodeida city and ports, releasing all the prisoners and lifting Taiz's siege.