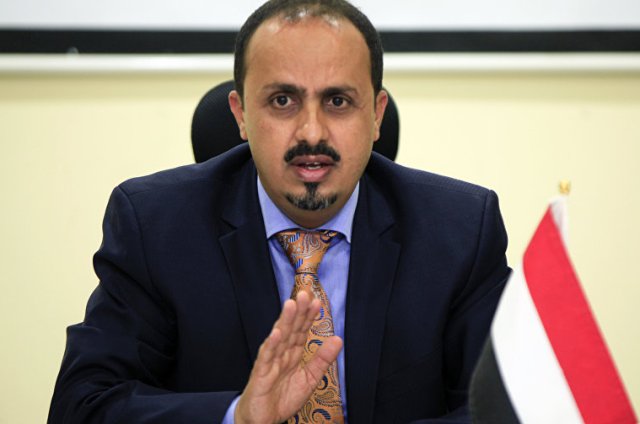 The Yemeni information minister denied on Saturday any meeting held by his internationally-recognized government with the Houthi group in Oman.

Untrue are the media reports that a meeting has been held between government officials and the Iranian-backed Houthis in the Omani capital of Muscat, Moammar al-Eryani added on Twitter. "We absolutely deny the occurrence of such meeting."

The government-Houthis meetings are declared and limited to the UN-sponsored negotiations, last of which were in Sweden, he said.

Parties to the 4.5-year war in Yemen, after 8-day peace talks in Sweden, reached on 13 December 2018 an agreement providing for ceasefire and redeployment of both sides' forces in Hodeida, exchanging prisoners and alleviating blockade imposed by Houthis on Taiz.

"Such lies are [like] fishing in troubled waters and an attempt to defame the government's constant stance in the battle for restoring the State and overthrowing the Houthi militia coup," Eryani said.

Yemeni and Arab media talked last week about a meeting in Muscat between ministers from official government and Houthi group.

A Yemeni government delegation, chaired by Deputy Primer Ahmed al-Maysari and including Parliament Deputy Speaker Abdul Aziz Jubari and Transportation Minister Saleh al-Jabwani, has been visiting Muscat since 21 September following an official call by Oman to discuss potentialities for peace, according to the interior ministry website.

On 17 September, the Sultanate called on Yemeni rivals to sit at negotiation table to end the conflict.

Muscat urged the UN envoy for Yemen, Martin Griffiths, to invite warring parties to peace talks, expressing willingness to support an accord on peace in the neighboring country.

Last Friday, Oman reiterated willingness to serve as a booster for any international efforts aimed at a political solution to bring security and stability to Yemen.

Yemen has been racked by a 4.5-year bloody conflict between the government's forces, backed by a Saudi-led coalition, and the Iranian-backed Houthi rebels who ousted the government in 2014.

Yemen war has left tens of thousands killed, hundreds of thousands injured, and 3 million displaced, triggering what the UN calls the world's worst humanitarian crisis, with most of the population in need for a type of humanitarian aid and immediate protection, including 14 million people risking famine and some 1.8 million children suffering malnutrition.