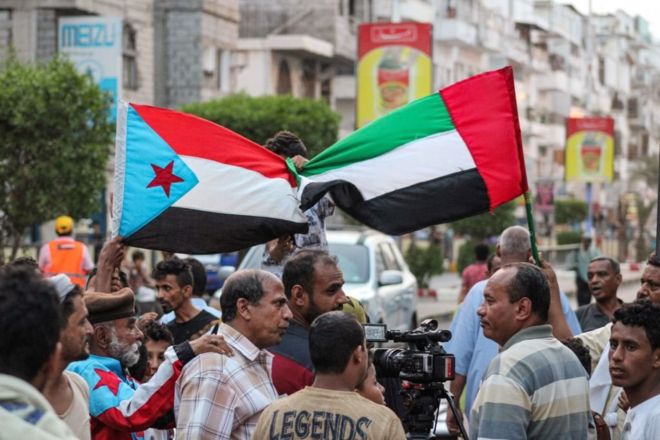 Every soldier in the Yemeni port city of Aden is on edge, Bethan McKernan has said in his article "Yemen: Aden's changing alliances erupt into four-year conflict's newest front" carried by The Guardian.

"In the recent fighting which saw the separatist Southern Transitional Council (STC) eject from the city troops loyal to the exiled Yemeni president [Abd Rabbu Mansour Hadi] – their former allies – al-Qaida took advantage of the chaos, putting on STC uniforms to ambush the soldiers here," the article added.

"More than four years in, Yemen's conflict is now actually three wars in one: a fight between the Iran-backed northern Houthi rebels and the Saudi-led coalition of Arab nations; a fight between both those parties and extremist elements such as al-Qaida and Islamic State; and belatedly, a fight between the STC, which wants a return to independence for south Yemen, and its former Yemeni government allies.

"The Guardian was invited by the STC to see the situation on the ground in Aden. What we found was a complicated tangle of separatist militias and politicians trying to consolidate control in a situation where alliances that may still exist on paper do not mean anything in reality.

"A situation that will make it even harder to bring an end to a war which has already killed an estimated 100,000 people and sparked the world's worst humanitarian crisis," McKernan wrote.

"The fighting also called the stability of the Saudi-led coalition into question after the reaction of the United Arab Emirates, its second-biggest member. When Hadi's Saudi-backed troops tried to launch a counterattack on 29 August, the UAE, which funds and arms the STC, launched airstrikes against them, killing about 40 soldiers and civilians.

"Aden has been the interim internationally-recognized capital of Yemen since the Houthis forced Hadi to leave Sana'a in 2015, but in this new chapter of the war, the Yemeni government no longer has a presence there. The UAE strikes were condemned by Yemen's information minister, Moammar al-Eryani, as a 'treacherous' attack.

The port city of Aden is nestled in the natural harbor formed by the crater of a dormant volcano. Jagged mountains surround it, curled around the city like a sleeping dragon. The ocean blue of the STC flag, usually twinned with that of the UAE, is unmissable," she said.