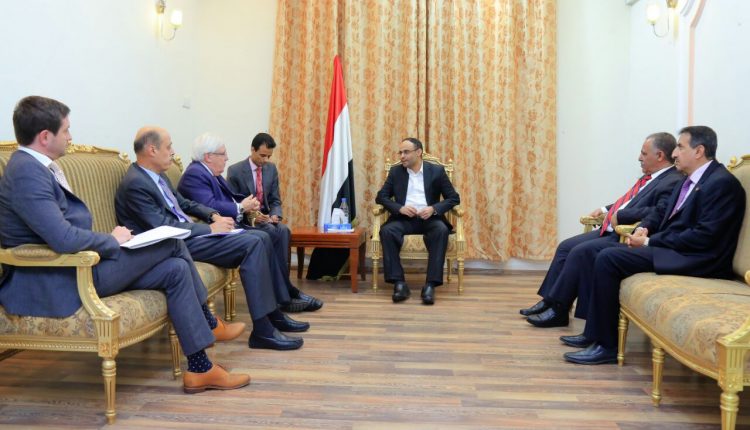 The Saudi-led Arab coalition in support of legitimacy in Yemen has vowed more "painful blows" if the September 20 peace initiative is not addressed.

This was stated by the leader of the so-called Supreme Political Council Mahdi Mashat during his meeting  with UN Special Envoy to Yemen Martin Griffiths on Tuesday evening.

Al-Mashat claimed that his group has presented several practical steps that confirm its seriousness to reach peace, including the implementation of more than 90 percent of the commitments of the Stockholm Agreement on Hodeida several months ago, without the other party to make any step in the agreement, according to Houthi-run Yemeni news agency "Saba".

"For the sake of peace, we have presented many initiatives, the latest of which is to stop targeting Saudi Arabia in exchange for halting the targeting of Yemeni territories and lifting the siege, and the release of hundreds of prisoners unilaterally, while the aggression is still reluctant to provide any practical steps that confirm his desire for peace.", he said.

The Houthi leader added: "When we launched the initiative, our goal was peace. In order to reach it, we had to postpone many of the strategic blows that were planned and planned, which are no less in size and impact than the Aramco strike."

He pointed out that his group gave "the other party (Saudi Arabia) the opportunity to pick up the initiative and exploit and hear the voice of reason and logic," adding: "We wanted to raise the voice of peace, and if they do not listen to him we have painful blows will make them listen to him."

He considered that "the position of the other party to peace did not exceed the statements that have no translation on the ground."

Saudi Crown Prince Mohammed bin Salman said the Houthis' announcement of a ceasefire was a positive step forward in pushing for a more serious and active political dialogue to end the war, but first called on Iran to stop its support for the Houthis to make the political solution easier.

Al-Mashat pointed out that the countries of aggression (coalition) instead of offering practical steps towards peace has escalated its economic war by escalating acts of piracy and the detention of ships carrying food, medicine and oil derivatives.

He warned that "these actions raise the level of the threat of maritime navigation and the militarization of the Red Sea," blaming the coalition countries all the consequences.

Al-Mashat called on the United Nations to "play its part by opening Sana'a International Airport as a humanitarian issue," accusing it of not reacting seriously to the continuation of the siege imposed on the city of Durayhimi in the western province of Hodeida for more than a year.