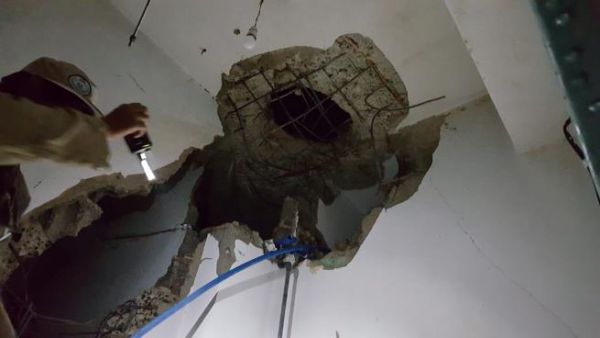 The Saudi-led coalition on Wednesday said its aircraft hit the Sana'a-based national blood transfusion center in 2018, by mistake, as the bomb was meant to hit a military legitimate target.
Coalition forces fired one guided bomb at a military target – a gas station, inside the special security forces' camp, seized and used by Houthis for war efforts – in April 2018, said spokesman for the coalition-formed joint panel to judge accidents in Yemen.
But an error in it led the bomb to fall on the center and cause lateral damages, Mansour al-Mansour added at press conference in Riyadh, attributing the incident to the center's adjacency (some 200 meters) to the gas station.
"On explosions occurred in the center's building following the bomb's fall, as it was concrete with no explosives inside," he argued.
To target a gas station inside a camp, the coalition took the right measures in compliance with the international human law, Mansour added.
The panel called on the coalition to provide assistances in compensation for the damages suffered by the national center following the bombing.
Yemen has been racked by an armed conflict that broke out after the Iranian-backed Houthis had ousted the internationally-recognized government late in 2014.
The conflict escalated after a Saudi-led coalition intervened militarily in the country in March 2015 to reinstate the government of President Hadi in the rebel-held Sana'a.
Some of the coalition airstrikes have missed targets, however, leaving hundreds of civilians killed and making UN agencies accuse the coalition of war crimes.
The coalition-formed joint panel often denies reports by UN and international agencies and by media accusing the coalition of committing crimes in the 4.5-year war seen by Yemen.
At Wednesday news conference, Mansour denied the "allegations" of mistakes committed by coalition during military operations in Lahj and Sa'ada governorates and Sana'a city, claiming they "were military legitimate targets in compliance with the international law."
Yemen's war has left tens of thousands killed, hundreds of thousands injured and 3 million displaced, triggering what the UN calls the world's worst humanitarian crisis.