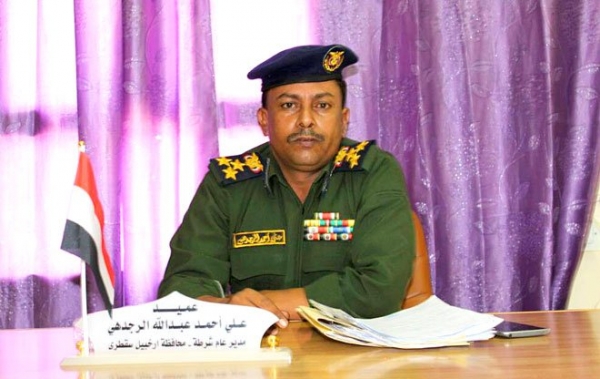 Local sources said on Sunday evening that a former UAE-backed security official refused to hand over a government headquarters he took over after he was dismissed from his post in the province of Socotra Archipelago, southern Yemen.

The sources added that the director of Socotra's police Ali al-Rajdahi refused to withdraw from the police headquarters, despite the expiry of the deadline set by mediation led by Saudi officers.

Saudi mediation led to the dismissal of police chief Ali al-Rajdahi until Sunday to hand over the headquarters he held along with separatist militants to Fayez Salem Tahes, the newly appointed police chief by Yemeni President Abdrabbo Mansour Hadi.

The agreement also called for the withdrawal of the UAE-backed Southern Transitional Council forces from all checkpoints created in Socotra, and handed over to local authority security forces.

The dismissal prompted Rajdahi to declare a rebellion against the decision and attack security headquarters in Hedibu, the capital of Socotra, at the behest of Emirati officers.

The sources pointed out that the UAE-backed forces led by Rajdhi still control the center of al-Shamel, one of the security headquarters in the capital Hedibu.

The Revolutionary Mobility Council of Socotra called on the UAE-backed transitional council and its military and security services to stop trying to dominate, spread chaos and claim a monopoly on the issue of the south.

In a statement, the council called on the sons of Socotra to refuse to be dragged into chaos and to preserve state institutions and facilities.