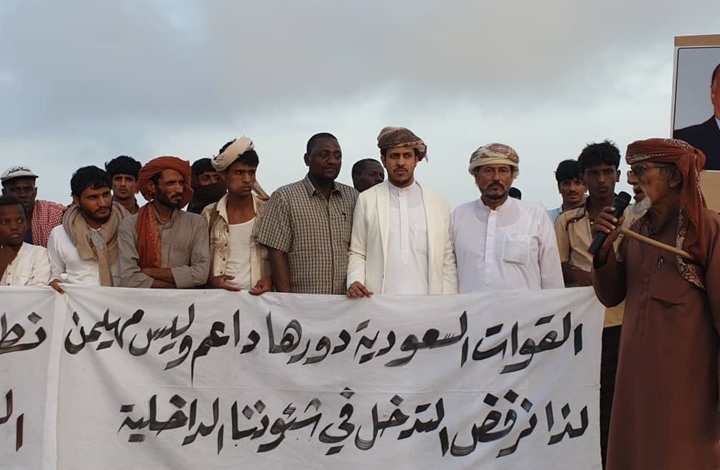 Yemeni tribes were forced into the southern Yemeni province of Mahra on Wednesday Saudi military reinforcements were on their way to the crossing of Surfeet with Oman to retreat.

A local source at Mahra said that the people of Hawf Directorate stopped ambulances carrying Saudi soldiers on their way to the port of Surfeet.They closed the gate for goods in the crossing because "Saudi soldiers attacked customs officials."

The source said that local efforts in the directorate failed to calm the situation and implement the demands of the sons of Hawf to remove the Saudi forces from the port, following the Saudi rejection.

The sons of Hawf confirmed that the cargo gate at the port will remain closed until Saudi forces leave.

Last March, Saudi Ambassador to Yemen Mohammed Al-Jaber defended the Saudi presence in Mahra in an interview with Al-Sharq Al-Awsat newspaper , pointing out that it comes to development and combating arms and drug smuggling.

Saudi Arabia has exploited the 4.5-year war in Yemen, where the Kingdom has been leading an Arab military coalition, to deploy large forces in Mahara late in 2017 and early 2018 when its troops took control of Ghaida airport, Nashtoon seaport and land ports of Shahin and Surfeet, on the pretext of guarding borders and preventing Iranian arms from being smuggled to Houthis.