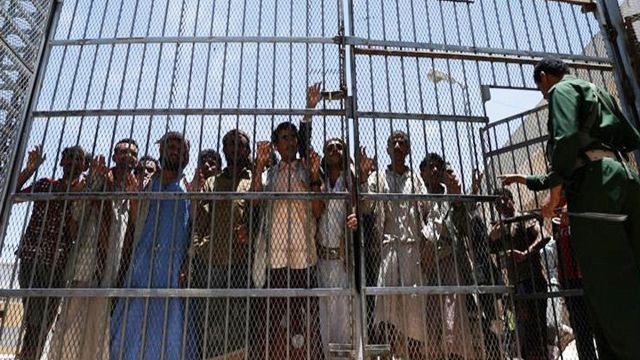 The Yemeni internationally-recognized government said Friday it received no offer from Houthis on prisoner swap deal, accusing the group of "overbidding in humanitarian issues for political purposes."

On Thursday, the Houthi group said it offered the official government a deal on exchanging 2,000 prisoners through a local mediation, waiting for the government reply.

However, "we have received no [offer], and our stance is clear," said the head of the government prisoner committee.

"If we're willing now to fulfill our commitments, we have to respect [the prisoner swap deal] we inked" as part of the UN-sponsored peace talks in Sweden last December, Hadi Haij added on Twitter.

"We're prepared. But overbidding on humanitarian issues of abductees and prisoners for political purposes is the language of helpless."

Government delegation "insisted on exchanging all for all prisoners, from both sides," sources told Debriefer the, as agreed upon at peace talks.

On September 30, Houthis released 350 prisoners, in a move welcomed by the UN that seeks to revive a stalled peace process.

During the last two years, both sides have swapped tens of prisoners and bodies through local tribal mediations.

The Yemeni government and Houthi group, after 8-day peace talks, reached on the 13th of last December a UN-brokered agreement providing for prisoner swap, as well as ceasefire in Hodeida and redeployment of both sides' forces and alleviating blockade imposed by Houthis on Taiz.