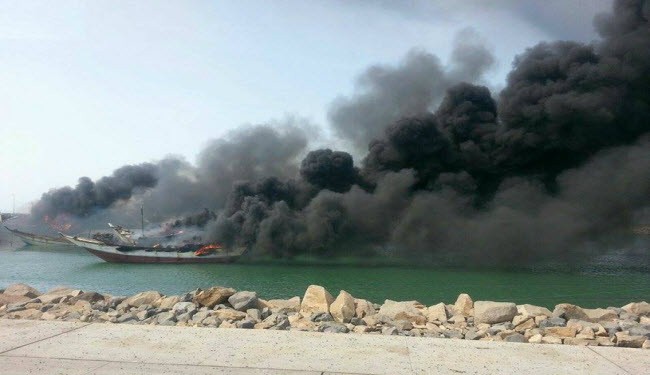 The Houthi group (Ansar Allah) claimed on Saturday that warplanes of the Saudi-led Arab Coalition  supporting legitimacy in Yemen, targeted a fishing boat north of Al-Hodeida city west of the country, in violation of the recently signed cease-fire agreement.

Mohammad Qohim, appointed by the Houthis as governor of Al-Hodeida governorate, said in a statement reported by the Houthi-run Al-Masirah channel, that the coalition planes "targeted a fishing boat in Ras Isa coast north of Al-Hodeida city, in a flagrant violation of the cease-fire agreement, and an attempt to abort the international efforts to stabilize the cease-fire".

"We are waiting for a response and clarification from the UN team supervising the implementation of the Swedish agreement after the raid on a fishing boat," he added.

Al-Masirah TV reported on Saturday that an air raid by coalition aircraft targeted a fishing boat on Ras Isa coast, considering it a "dangerous escalation" that came "days after signing the final agreement to stop fire in Al-Hodeida and fix the fifth point for monitoring violations under the auspices of the United Nations".

Last week, the United Nations-led Coordinating Committee for redeployment was able to deploy five ceasefire monitoring points between internationally recognized Yemeni government forces and the Houthi group (Ansar Allah) in the governorate of al-Hodeida after a year-long hard work.

Ansar Allah (Houthis) has controlled Hodeida city and its ports since late 2014, while joint Yemeni forces loyal to the "legitimate" government and the Arab Coalition have been deployed since the beginning of November on the outskirts of the city in order to wrest control of the Houthis.

Yemen 4.5-year war has triggered what the UN calls the world's worst humanitarian crisis, with most of the population in need for a type of humanitarian aid and immediate protection, including 14 million people risking famine and some 1.8 million children suffering malnutrition.