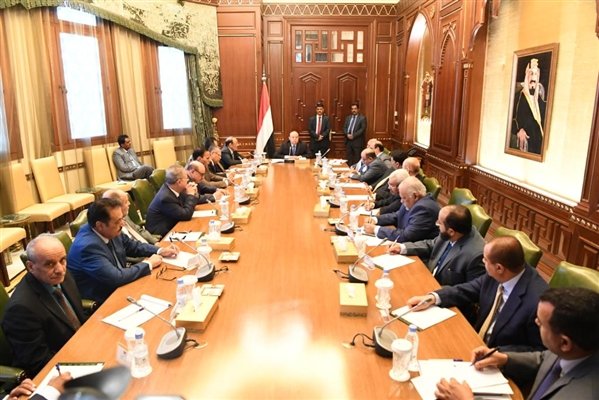 Yemeni President Abed Rabbo Mansour Hadi ,on Sunday, welcomed the decision of the coalition command to reposition coalition forces in the southern city of Aden.

This came during President Hadi's heading of a meeting of his advisors and Head of the Parliament and the Ministers on Sunday, in the Saudi capital, Riyadh, to get acquainted with developments in the Yemeni arena.

According to the Yemeni News Agency (Saba) in its edition in Riyadh and Aden, Hadi praised the "laudable efforts made and always made  by Saudi Arabia to achieve security and stability and establish Peace landmarks in Yemen."

Hadi stressed that the agreement between the Yemeni government and the transitional council is primarily aimed to heal the split, ending the rebellion and uniting energies towards the larger goal of "ending the Houthi coup" and "defeating Iran's project in the region."

Hadi pointed out that "the Riyadh agreement came in accordance with the peace references based on the Gulf initiative and the outcomes of the national dialogue and the relevant UN resolutions, especially resolution No.2216, to end the coup and its repercussions and win for the choices of the Yemeni people." as he said.

In  the meeting, which discussed several Yemeni emergency issues, it was stressed on "unifying and intensifying the efforts to fully activate the role of the state institutions and to work from the temporary capital , Aden. "

The meeting also stressed that the presence of the state in Aden is to "carry out its responsibilities at various levels, provide services, improve the standard of living of the people, strengthen the unity of the armed forces and security, and to ensure that there are no weapons or military or security formations outside the defense and interior ministries."

It  called an invetation for the Yemeni political forces ,to be at its requirement and to refrain from any act that tears the national unity or weakens the home front.