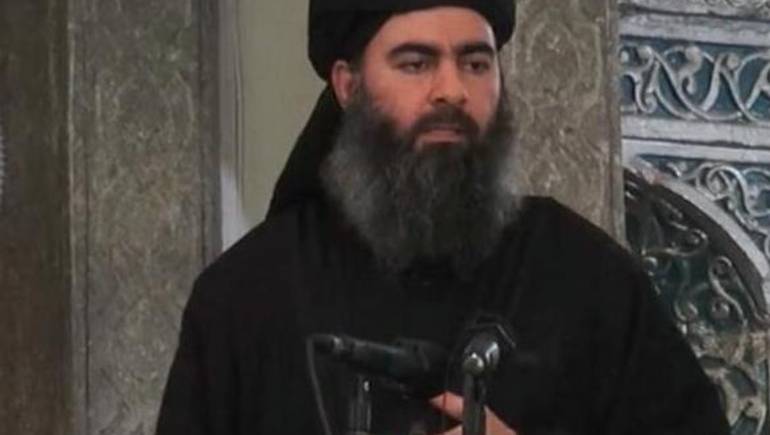 Baghdadi, who had led the jihadist group since 2010, killed himself by detonating a suicide vest after fleeing into a dead-end tunnel as U.S. forces closed in, Trump said in a televised address from the White House.

He was positively identified by DNA tests 15 minutes later, the president said.

“He was a sick and depraved man and now he’s gone,” said Trump, adding that capturing or killing Baghdadi had been his administration’s top national security priority.

The death of Baghdadi is a severe blow to Islamic State, which has been in disarray and has no declared successor as leader yet. But the group has in the past proved resilient, continuing to mount or inspire attacks in the region and beyond despite losing most of its territory in recent years.

Baghdadi had long been sought by the United States - which offered a $25 million reward for his capture - as leader of a jihadist group that at one point controlled large areas of Syria and Iraq, where it declared a caliphate.

Islamic State has carried out atrocities against religious minorities and attacks on five continents in the name of an ultra-fanatic version of Islam that horrified mainstream Muslims.

“Baghdadi’s death represents a huge blow to the organization’s capacity to swell its ranks, mobilize its existing supporters and develop the momentum that could restore it to its past glories,” said Ranj Alaaldin, a fellow at Brookings Institution in Doha focused on Iraq.

“That said, ISIS (Islamic State) will still be a potent, under-ground terrorist threat.”

Trump said “many” of Baghdadi’s people were killed in the raid and added that in blowing himself up, Baghdadi also killed three of his children.

U.S. forces suffered no personnel losses, he said. He also thanked Russia, Turkey, Syria and Iraq for their support.

Turkey said it was proud to have helped “bring a notorious terrorist to justice”, but Russia’s response was skeptical, with the defense ministry in Moscow saying that it had no reliable information on the U.S. raid and observing there had been previous attempts to kill Baghdadi.

Trump said Baghdadi “reached the end of the tunnel as our dogs chased him down. He ignited his vest, killing himself and his three children”.

“He died ... whimpering and crying and screaming.”

The raid comes weeks after Trump announced the withdrawal of U.S. troops from northeastern Syria, which permitted Turkey to attack America’s Kurdish allies as it sought to set up a “safe zone”.

The move drew withering criticism from fellow Republicans and Democrats, who expressed concern both at the abandoning of the Kurdish fighters who were instrumental in defeating Islamic State forces in Syria, and that the move might allow the group to regain strength and pose a threat to U.S. interests.

Trump said the raid would not change his decision to withdraw troops from Syria.

But the successful targeting of Baghdadi could help blunt those concerns, as well as boosting Trump domestically at a time when he is facing an impeachment inquiry in the U.S. House of Representatives.

But some, such as French President Emmanuel Macron, also warned Islamic State was not finished. “Al-Baghdadi’s death is a hard blow against Islamic State, but it is just a stage,” he said. France’s interior minister called for increased vigilance in case of acts of revenge by extremists.

Longtime U.S. foe Iran, which accuses the United States and its allies of creating Islamic State, was dismissive. Information Minister Mohammad Javad Azari-Jahromi, tweeted: “Not a big deal, You just killed your creature”.

Iraqi analyst Hisham al-Hashemi, an expert on jihadist groups, said Baghdadi’s death was likely to lead to a split within Islamic State.

“The split in IS is inevitable, it always happens when any radical religious group loses a charismatic leader,” he said.

In the hours before Trump’s announcement, sources in the region had described the raid on a compound in the village of Barisha, in Idlib province bordering Turkey, in the early hours of Sunday.

Iraqi state television broadcast night-time footage of an explosion and daytime images of a crater in the ground and what it said was the aftermath of the raid, including torn and blood-stained clothes.

Iraq’s military said later in a statement that its intelligence services had located Baghdadi’s whereabouts and had passed the information to the United States.

Trump said eight helicopters carried the U.S. special forces troops to the compound where Baghdadi was hiding, where they were met with gunfire before blasting their way in through the walls to avoid a booby-trapped main door.

The U.S. forces spent around two hours in the compound, he said, adding that they had taken away “highly sensitive material and information”.

Russia “treated us great” by opening up airspace it controlled for the raid and Kurdish allies gave some helpful information, according to Trump. The Russian defense ministry, however, said it was not aware of any assistance to U.S. forces.

The president said he watched the operation unfold in the Situation Room of the White House.

The military named the operation against Baghdadi after U.S. aid worker and hostage Kayla Mueller, U.S. national security adviser Robert O'Brien told NBC's "Meet the Press". In 2015, U.S. officials told Reuters here Mueller had been repeatedly raped by Baghdadi himself before she died in Islamic State custody earlier that year.

RELIEF FOR A GRIEVING FATHER

At the height of its power, Islamic State ruled over millions of people in territory running from northern Syria through towns and villages along the Tigris and Euphrates valleys to the outskirts of the Iraqi capital Baghdad.

Thousands of civilians were killed by the group as it mounted what the United Nations called a genocidal campaign against Iraq’s Yazidi minority. It also caused worldwide revulsion by beheading foreign nationals from countries including the United States, Britain and Japan.

In one notorious incident, referred to by Trump in his TV address, a captured Jordanian air force pilot was burned alive in a cage.

On Sunday the pilot’s father, Safi Al-Kasaesbeh, told Reuters TV he was relieved by news of Baghdadi’s death.

“I am proud and happy on this day, after hearing of the death of Abu Bakr al-Baghdadi, this corrupt man, this insect, this virus that spread throughout the body of not only the Arab nation but also the Muslim nation, who distorted the image of Muslims and Islam,” he said.

The group has claimed responsibility for or inspired attacks in dozens of cities including Paris, Nice, Orlando, Manchester, London and Berlin, and in nearby Turkey, Iran, Saudi Arabia and Egypt.

But in 2017 Islamic State lost control of Mosul in Iraq and Raqqa in Syria, and quickly thereafter almost all of its territory, turning Baghdadi into a fugitive.