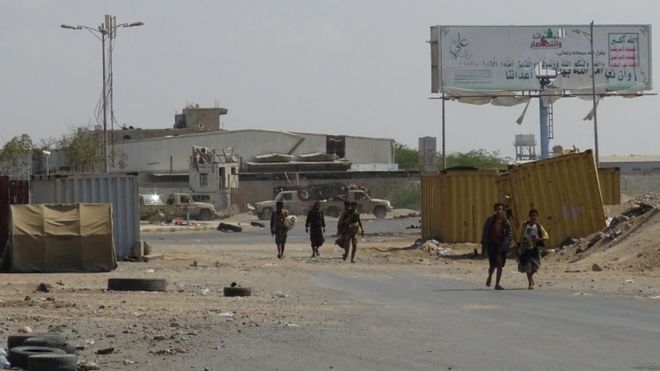 Houthi negotiators at the UN-missioned Redeployment Coordination Committee (RCC) have called on the mission, at meeting with its chair, to move the Hodeida monitoring tasks to the Red Sea port, and to prevent the "sea piracy against oil and commercial vessels."

Meeting with the Indian General Abhijit Guha has discussed practical steps to swap all-for-all prisoners detained by both parties at the western coast front, according to the rebel-run al-Masayra TV.

The group representatives called for inclusive ceasefire and for making the Yemeni internationally-recognized government forces fulfill the first and second stages of redeployment steps, the TV added.

"The United Nations is asked to identify the party hindering the memos and pacts, and to put an end to the persistent violations and murders against fishermen," the channel quoted Houthi negotiator Mohamed Qaderi as saying.

Government and Houthis have blamed each other for ceasefire violations and hindering the application of a deal they reached in Sweden.

Parties to the 4.5-year war in Yemen, after 8-day peace talks, reached on the 13th of last December the Stockholm Agreement providing for ceasefire in Hodeida and redeployment of both sides' forces, exchanging prisoners and alleviating blockade imposed by Houthis on Taiz.

Yemen has been racked by a bloody conflict between the Yemeni government's forces, backed by a Saudi-led coalition, and the Iranian-backed Houthi rebels who ousted the government in 2014.