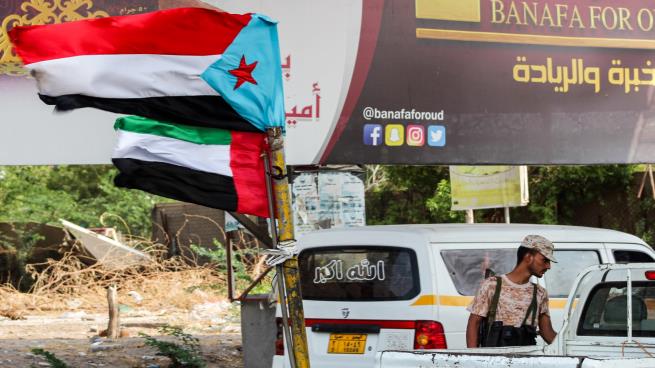 The Riyadh Agreement,between the Yemeni internationally-recognized government and the separatist Southern Transitional Council (STC), is a glimpse of hope to end a conflict that started after Aden had been freed from Houthi control in July 2015 and developed into armed clashes last August, the Anadolu Agency (AA) said Monday.

"While the STC's declared goal is to separate from the north and to establish an independent state, with the government of President AbdRabbu Mansour Hadi insisting on Yemen's unity, the existing draft pact clearly provides for a one Yemeni state, the return of executive and legislative institutions to Aden, integration of all military units into the defense and interior ministries, and for giving the STC portfolios in the legitimate government," an AA article, 'Riyadh Agreement, will end the mutiny in south of Yemen?', read.

"It's clear that the only gain achieved by the STC is its involvement into the government negotiations on an ultimate political solution," the article added.

The government and STC held stalled talks, until last Thursday, when a deal was stricken to end the rebellion and allow for the State's authorities to return to Aden, it said.

"The pact's most significant provisions is that the government would return and restore Aden, the security and military units that were abused by the STC and UAE would be integrated into legitimate institutions, and partnership would be shared equally between north and south as concluded at the National Dialogue Conference," a Yemeni southern writer was quoted as saying in the article.

"While it brings the STC to the front as a partner, the pact legitimizes other southern entities (like Hadhramout Inclusive Conference, Southern National Alliance, and peaceful Southern Movement), which are in contrast with the STC," Abdul Raqeeb al-Hadiani added.

The STC has waivedits alleged exclusive right to represent the south, by admitting that the south is diverse and agreeing to come under the government, he argued.

"The deal is a victory for the legitimate government, as it would restore its capital and influence and unify the front of different ranks, despite the concessions," he added.

For Adnan Hashim, a journalist and researcher concerned with Gulf and Iranian affairs, the "Riyadh Agreement has its positives and negatives, as any pact brokered by a foreign political mediator.

"Any deal or proposal,which leads to the dissolution of the Abu Dhabi-affiliated militias in the south of Yemen, is good. Other matters would be the concern of the legitimate government that is expected to assumed its role and impose security and authority in southern governorates.

"If the Emirati militias remain inside the administrative and decision-makinghierarchy, we're before a bad stage and a delayed war that would cost a lot."

Granting the STC legitimate existence, after being denied recognition by the government since 2017, is a "new challenge for the legitimate government, as this would lead either the STC to swallow the government from inside or the latter to contain the former," Hashim thinks.

As for the pact's applicability and sustainability, Hadiani told AA that the Emirati pullout and implementing a part of the military aspect on the ground before officially inking the deal indicate potential application of the political aspect, promising constant changes.

With government large forces stationed in Shoqra city close to Aden, balance of powers has changed, he added.

Hashim, however, sees it is early to infer potential failure or applicability without knowing the other southern signatories and all details of the pact.

Nabeel al-Bokairi, a Yemeni analyst, said applicability would depend on how the parties and the sponsor (the Saudis) are serious.

"There is a good chance for the deal's success, as it redistributed the portfolios in harmony with the National Dialogue outputs," he added.

"If the pact doesn't provide for Yemeni territorial unity, it's difficult to talk about any later achievements. To succeed, the deal should also refer to the three terms of reference; the National Dialogue outputs, the GCC Initiative and the UNSC Resolution 2216."

But Hadiani thinks that the result of any deal should meet the minimum demands of its parties.

Hadiani concluded that the "pact and its implementation indicate how any pact with the Houthis would be managed. Yemenis seem to be before a new stage of quota for coming years."