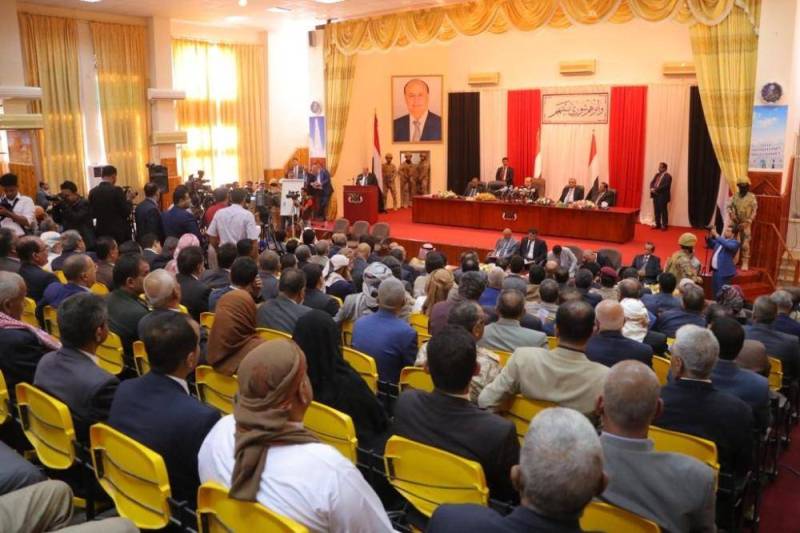 The Yemeni Parliament will hold its second session in the southern port city of Aden, a Yemeni minister said Tuesday, pending to officially signing the Riyadh Agreement between the internationally-recognized government and the Emirati-backed Southern Transitional Council (STC).

The Parliament second session will be held in Aden, seat of the official government, after the Riyadh deal is inked, the Yemeni minister for Parliament and Shura affairs told the Saudi Asharq Al-awsat.

The Parliament "will assume their role and tasks in monitoring the Yemeni government's performance, according to a clear provision that the Parliament should hold session in the city to commence tasks effectively," Minister Mohamed al-Himiari added.

Supervising the government performance would be only with other State's institution present inside Yemen, and in the city where the government works, he said.

"The Parliament session in Aden will be a new slam against the Houthi militias, and will mean the sound course in the south," he argued.

Under the Saudi-brokered pact, the government would return to Aden, he reiterated.

The Parliament session will be a priority, particularly with the Houthi group detaining 20 MPs in Sana'a, after it referred 35 MPs to justice and seized the properties of 50 others, Himiari added.

On April 13, the Yemeni Parliament convened in Seyoun, in the presence of the Yemeni President Abd Rabbu Mansour Hadi, after a pause of more than four years following Houthi seizure of the capital Sana'a.

The Yemeni Parliament has been experiencing division following the war, as most of its members in Houthi-held areas used to hold semi-regular sessions in Sana'a, including Speaker Raa'i.

But their number has increasingly declined after former president Ali Abdullah Saleh was killed in his house by Houthis on the 4th of December, 2017, two days after he had declared his GPC party's disconnection from partnership with Houthis and called for uprising against the group.

On the 14th of last September, a Houthi-controlled court in Sana'a issued a judgment seizing the properties of 35 Yemeni MPs and 70 officials opposing their policies, including Speaker Barakani.

On September 10, Houthi authorities referred opponent MPs to trial over charges of "abusing the independence and integrity of Yemeni Republic's lands, spying for foreign countries – namely Saudi Arabia and allied countries of aggression coalition – and collaborating with those countries in their aggression on Yemen."