Reactions on Hariri's resignation ..Politically "cold" and "inflamed" on the street 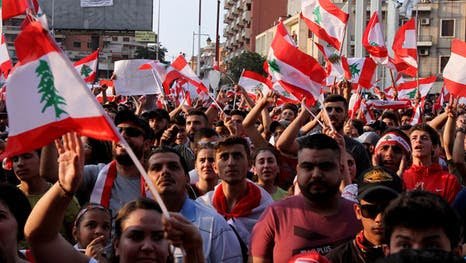 As soon as Lebanese Prime Minister Saad Hariri announced in the early hours of Tuesday that he would go to the Baabda Palace to give his resignation to President Michel Aoun,different reactions to the resignation arouse between welcoming it in a cold manner and other worried manner, while the protesting street increased. " sticking by its position and demands, and it is on the verge of completing its second protest week on tomorrow's Wednesday.

The first or the most significant reaction came from inside the Baabda Palace in Beirut. A source in the Lebanese presidency said that Aoun was "considering Hariri's resignation letter" and that he "would not ask the government to continue to run the country in a temporarily manner."

While from inside the government, Lebanese Interior Minister Raya Hassan commented on her official Twitter account, saying: "Hariri's resignation was necessary to prevent the slide towards a civil strife that we have witnessed its danger today in downtown Beirut."

In turn, the head of the Progressive Socialist Party, former MP Walid Joumblatt, called on the Lebanese street, after the resignation of Prime Minister Saad Hariri.

Joumblatt said in his Twitter account : "From the first moment I called for dialogue, and when I refused to resign, there was a position of restlessness and discomfort within the ranks of the Socialist Party."

He added: "I have endured a lot, but at this fateful moment, after Sheikh Saad Hariri announced the resignation of the government, after he tried so hard to reach a settlement and we tried with him, I call again for a dialogue and calmness."

Lebanese Forces leader Samir Geagea welcomed the resignation of AL-Hariri in response to the demands of the protesters, and called for the formation of a competent government (technocrats).

In the first international reaction to Al- Hariri's resignation, French Foreign Minister Jean-Yves Le Drian said in a speech infront of the National Assembly that "Lebanon has been going through a major crisis since the beginning of the large protests that witnessed tensions and some events, and there is a crisis of confidence."

He added: "The Crises in the region have made the situation in Lebanon fragile,  and the fragility of the situation is also a result of the economic crisis."

In addition he noted that Hariri's resignation "will exacerbate the crisis and France calls on Lebanese officials to make every effort to ensure the stability of the institutions and the unity of the country."

The Union of Banks said that banks were keen to ensure public and private sector workers receive their salaries.

The unrest has deepened the economic crisis in a way that was not seen since the 1975-1990 civil war, which resulted in scarcity of hard currency and a devaluation of the Lebanese pound.

Today ,The Lebanese Prime Minister Saad Hariri, announced his resignation , and placed it at the disposal of President Michel Aoun, and that was after the protests reached a "dead end", as he said.

Hariri said: "For 13 days, the Lebanese people have been waiting for a political solution to stop the deterioration."

"I have tried during this period to find a way out through listening to the voice of people, and protect the country from security, economic and living risks."

The Lebanese regions witnessed a festive atmosphere following Hariri's announcement of the resignation of his government.

The resignation announcement was preceded by a groups of young people, who are opposed to popular protests in Lebanon, attacking the protesters in the center of the capital Beirut;

The attackers demolished and burned the tents of the protesters in the Martyrs  and Riyadh al-Solh Squares,  and clashed with others in the Ring Bridge area, and the army pushed security reinforcements to the center of the capital, and his forces are working on separating the protesters and the opponents of protests .

The protests began on October 17, rejecting a government project to increase taxes on citizens in the budget of 2020, before the demonstrators raised the ceiling of their demands to recover the looted funds and combat rampant corruption and accountability of the currpet.

The protests continued despite the announcing of Prime Minister Saad Hariri's government last week  a series of measures aimed at calming protesters and implementing long-awaited reforms to fill gaps in the public budget.