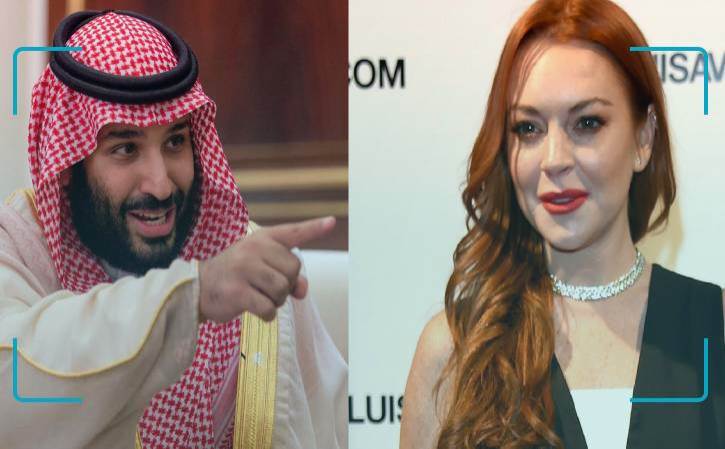 Michael Lohan, the father of the famous American singer Lindsay Lohan, has denied that his daughter,is in a secret relationship with the Saudi crown prince,

The comment of father of the American singer came in an interview for the site "Bage Six" on the existence of an emotional relationship between the Saudi Crown Prince and Lohan, as rumors said that Mohammed bin Salman accompanied her in a private plane, and flooded her with precious gifts, which included a credit card wrapped in gift s paper, according to the report.

One of the Middle East researcher commented "It s amazing that America s strong relationship with the Saudi crown prince is through Lindsay Lohan and Jared Kushner," .

The father, who spoke proudly of his daughter s relationship with the Saudi crown prince, assured to "Bage Six" that they are just friends, stressing that his daughter has a large number of friends in the Middle East, for her strong presence there , he pointed out that Lindsay met Mohammed bin Salman because of her work with refugees in the region.

Lohan said that the media cares only about bad news, while not addressing his daughter s efforts with refugees in Syria.

When he was asked if he was worried about his daughter s relationship with someone who had thrown many of his family in jail, as well as giving orders to kill the journalist Jamal Khashoggi, Lohan said: "So far, none of these allegations have been proven."  Added , " my doughter says he is a good peraon and that she feels safe With him safe and she understands what she does well, " also Michel Lohan denied that Mohammed bin Salman had given his daughter a credit card.

There were rumors a few years ago about Lindsay Lohan s conversion to Islam, after appearing with a headscarf on more than one occasion, and confirmed that she reads Quran , in addition to the deletion of her photos on Instagram two years ago, and adding her image with scarf and the words "peace be upon you."

In August, The website "Bage Six" published rumors about the relationship between Mohammed bin Salman and Lohan, while an official spokesman for the American singer confirmed that they met only once in the race "Formula One".

In January 2018, Lohan announced that she wil be a star in a Saudi film called The Frame, where she plays a photographer who has to move to Saudi Arabia after a personal crisis to teach at a Saudi university for girls. And through the film she gets to know the Women s Movement in the Kingdom.