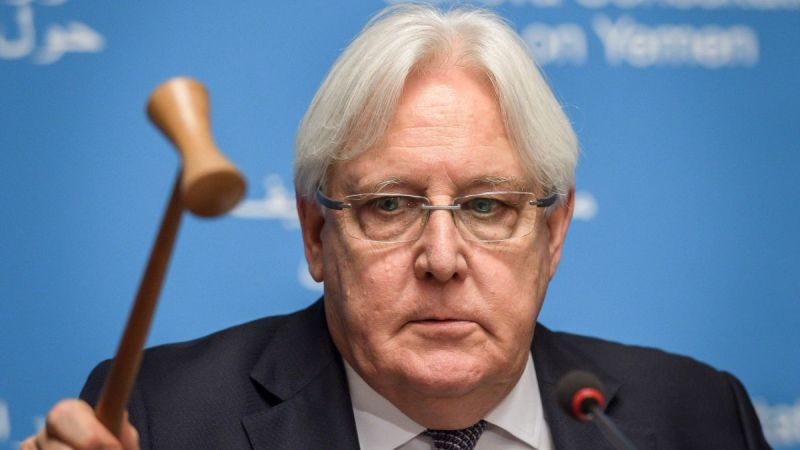 The UN envoy for Yemen is seeking to launch all-inclusive negotiations between parties to the 4.5-year conflict next month or early next year, political sources said Sunday.

Having held multi-meetings with officials at the Yemeni internationally-recognized government and Houthi group, with support from envoys of countries sponsoring the peace process in Yemen, Martin Griffiths wants to hold a round of comprehensive talks in December or 2020, the sources told the Emirati al-Bayan paper.

The US, UK and French ambassadors and Swedish especial envoy for Yemen have met with government and Houthi officials in order to cope with obstacles hindering the launch of this round, the sources added.

These meetings have aimed at pressuring the Houthis into proceeding with Hodeida file to finalize redeployment in city and its ports and to make progress in opening corridors to Taiz city. The envoys have also called on the government to quit the condition of full application of Stockholm deal before going to new talks, according to the sources.

The UN envoy hopes that signing the Riyadh Agreement would inspire a round of negotiations, and seeks to make a long-term truce deal on the basis of the Houthi offer to stop targeting Saudi lands and the release of prisoners detained by the group, the sources said.

Last Thursday, the UN envoy said the Stockholm pact was not a condition for the political process to proceed.

We should remember that the Stockholm Agreement was a humanitarian deal to bridge an outstanding gap, put not a precondition for political process, Griffiths told the Saudi Asharq Al-awsat.

The pact includes certain measures for trust building with the aim of boosting, but not obstructing, the peace process, he added.

But the Yemeni government has repeatedly said it would not participate in any new political process before the deal is fulfilled.

To go to new talks while Stockholm Agreement has yet to apply would embolden the Houthi group to not implement any future deal, the Yemeni Foreign Minister Mohamed al-Hadhrami told the Swedish especial envoy Peter Simnpy on 21 October.

With both sides trading blames for trying to thwart the deal, the UN-brokered Stockholm Agreement has been facing many challenges and difficulties to implement on the ground, leading the UN Security Council to adopt a resolution deploying a UN mission to monitor the truce.