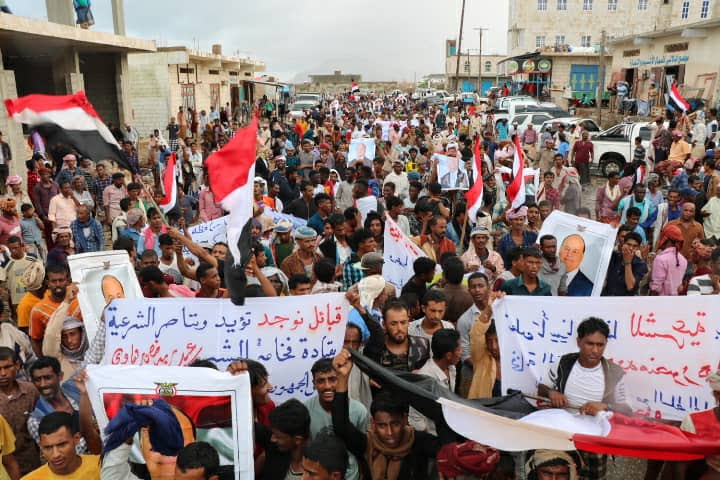 In the province of Socotra archipelago took place , on Sunday, mass demonstrations to demand an end to the UAE's interventions in the province.

Demonstrators in Hadibo, the capital of the province of the Socotra archipelago accused the UAE of supporting the chaos and tearing the social fabric in the province.

Thousands of people took part in the demonstration, which was marched through a number of streets before stopping in front of the headquarters of the Arab coalition forces in the province.

According to a statement issued by the demonstration, the demonstration condemned the "absurdity of the UAE through its arms inside the province," as the demonstrators confirmed their support for the legitimacy of President Abdrabbo Mansour Hadi and the local authority represented by the governor.

The statement delivered by a member of the Southern National Coalition, Ahmed Jomaan, in front of the headquarters of the coalition forces in Socotra, and condemned the "chaos by the UAE-backed Southern Transitional Council in blocking streets and disrupting public and private interests."

Jomaan blamed the UAE for sowing discord, supporting the chaos and breaking up the Socotra social fabric through its arms of the Southern Transitional Council and the outlawed militias.

He pointed out that they "will not stand idly in front of this absurdity and will defend their homeland and will stand by the armed forces and security in establishing the foundations of law and order."

The demonstrations, following the erection of armed groups belonging to the Southern Transitional Council, backed by the UAE, on Wednesday, tents in front of the provincial headquarters to demand the dismissal of the governor.

Last week, the executive office of the Socotra archipelago rejected what it called "the exploitation of some humanitarian agencies in Socotra to violate the internationally recognized law and order" (referring to the Khalifa Foundation and the UAE Red Crescent operating on the island(.

Accordingly, the authorities of the province of Socotra prevented, at the beginning of last week, an Emirati plane carrying eight foreigners of Indian nationality, from landing at island airport.